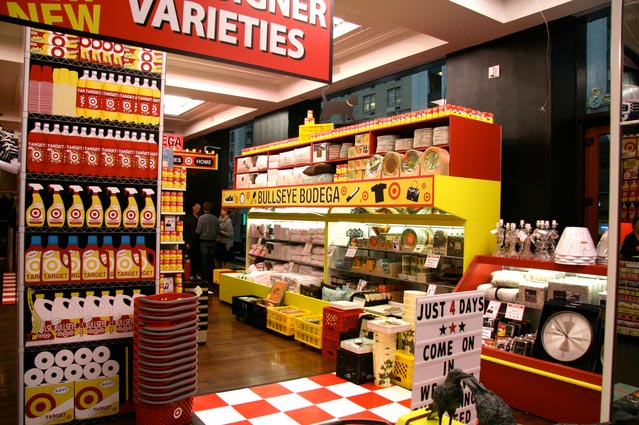 It was previously reported that Target would be opening their promotional "Bullseye Bodegas" at four temporary locations around Manhattan on September 11th. Now the opening date is September 12th, so either the reports were wrong or someone in marketing realized that 9/11 might not be the most ideal day to launch a campaign with the word "bullseye" in it.

At any rate, they're here, and Apartment Therapy got a sneak peek. In business for just four days, the bodegas are supposed to give NYC shoppers "chic deals" on Target's new design partnerships before they hit real shelves in real Target stores. (Details and locations here.) Judging by the photos, the four colorful mini-stores seem evocative of a kid's pretend supermarket set, with ersatz bottles of milk and rolls of toilet paper. But the bodega homage won't be really complete unless Target hires actors to mill around the register and buy an annoying amount of lotto tickets.