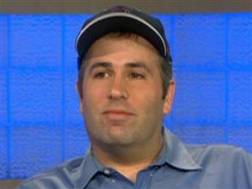 This morning, the Today show featured a segment about a NYC resident (and Mets fan, judging by his hat) who calls himself Jimmy Justice and spends his days documenting various civil servants - mainly traffic enforcement agents - committing various sins. It's like Uncivil Servants with more than a dash of confrontational TV.

You can see Jimmy Justice's videos here on YouTube. He asks a traffic agent why she's parked in front of a hydrant, why one has made an illegal U-turn and why one went to the Rite Aid. Jimmy Justice told Today show correspondent Kerry Sanders, "I’m not a superhero in the same vein as Superman or Batman, but if you want to call me a superhero, so be it.” Well, here's a video where nuances of double parking and duty are parsed:

He also explained that he took to videotaping civil servants breaking the law because his written and telephone complaints were being ignored. Jimmy Justice added that he's shopping the concept to TV networks, "We want to call it ‘Civilians,.' It’s going to be like the anti-C.O.P.S.”

In related news, earlier we mentioned that tickets made out to legally parked cars were part of the NYPD's quotas (they can only be dismissed in court) and that four traffic enforcement agents faked tickets to look busier than they really were.