Taking Your Travel to Infinity and Beyond! 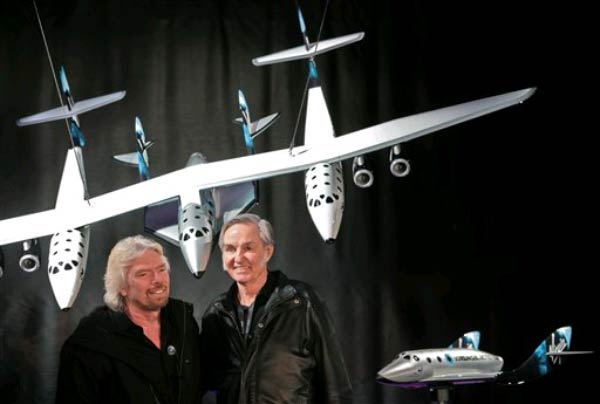 Above, photograph of Virgin Galactic's Richard Branson and Scaled Composites' Burt Rutan in front of a model; below thumbnail is a rendering of the WhiteKnight

At the American Museum of Natural History yesterday, British entrepreneur Richard Branson unveiled the aircraft for his Virgin Galactic space travel venture and promised, "2008 is really going to be the year of the spaceship."

Scaled Composites (which designed the spaceplane, SpaceShipOne, that had a human-piloted space flight a few years ago) has been working with Branson over the past two-plus years to develop two aircrafts: SpaceShipTwo and its launch plane, the WhiteKnight. The NY Times explained how the two planes work: 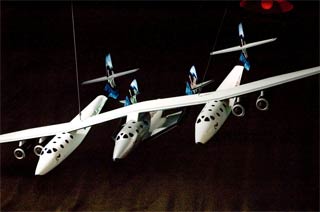 WhiteKnight, a two-fuselage, four-engine plane in its new incarnation, will ferry the smaller spacecraft [SpaceShipTwo] high into the sky and release it. The spacecraft pilot then fires the craft’s rocket engine, which burns a combination of nitrous oxide and a rubber-based solid fuel, and shoots the vehicle upward to an altitude of more than 62 miles, the realm of black sky.

Once there, the pilot is to activate the craft’s innovative feathered wing, which rotates into a position that greatly increases aerodynamic drag and slows the craft for a glider landing back on earth.

The flights would be to "suborbital space," 70 miles above the Earth and then back; passengers will "experience five minutes of zero gravity once in space."

Wired explained that among the differences between SS1 and SS2 are that SS2 is big enough for passengers to get up and walk around and that it will have many safety features since it's a commercial vehicle. The SS2 can carry 2 crew members and 6 passengers. 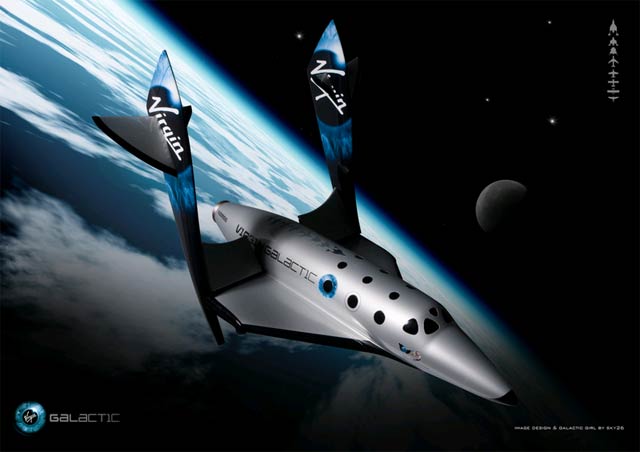 Branson claims that 200 people have signed up to travel to space with Virgin Galactic already, even in spite of the $200,000 price tag for the first round of flights (they have $30 million in deposits!). According to Virgin Galactic, the planes will be completed this year, first flight for the planes will be in 2009 and the first tourist flight is expected to be in 2010. However, the big test will be if the planes meet safety standards.

Would you travel to space if you had the money? One of the first potential customers writes on Wired about her fellow astronaut wannabes, "Many of them seem just like the guy next door, someone with a modest lifestyle who sees something they really want to invest their money in. Why? Not just for the experience, but also to help build a future for humankind that they have long wanted to see happen." And when you look at the Virgin Galactic FAQ, it mentions a three-day-training period and does reassure customers that they'll become an astronaut.