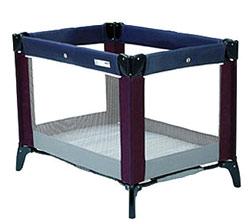 The short, sad life of Hailey Gonzalez ended yesterday when hospital staff at Richmond University Medical Center on Staten Island removed the 21-month-old from life support. Gonzalez had been in the hospital since last Thursday, when the police discovered that her mother and her mother's boyfriend had thrown her against a playpen and beaten her near the point of death. The couple had waited hours before calling 911, as Hailey foamed from the mouth and twitched from her injuries.

Her mother, Marlene Medina, was re-charged with second-degree manslaughter while her boyfriend, Edwin Garcia, was charged with second-degree murder. Apparently Medina and Garcia had claimed the other was behind the crime, but prosecutors said that Garcia implicated himself. The child's biological father, Manuel Gonzalez, has been serving a 2-year prison sentence for beating Hailey when she was 2 months old. The NY Times reports, "Court documents show that when Hailey was 2 months old, Mr. Gonzalez slapped her so hard that she developed a blood clot in her eye and swelling and bruises on her face."

Medina had been investigated by the Administration for Children's Services, but was allowed to keep custody of the child because she was not believed have been involved with that incident. However, ACS had been checking up on Medina as recently as June and discovered she was living with a man. According to today's Daily News, "The caseworker told Medina she was not permitted to have a man living with her without the agency's permission," but Medina claimed she was engaged and that she was pregnant.

Manuel Gonzalez's mother, Sonia Cintron, told the Daily News yesterday, "If ACS had the best interest of my grandchild they should have made every attempt to notify me." Cintron added that Hailey's heart would go to another child who needed a transplant.