Yesterday Mayor Bloomberg and other officials formally opened Hunter's Point South Waterfront Park in southern Queens, completing the first step of the area's transformation from post-industrial area to mixed-use residential community. The 5.5 acre park features a central green, a playground, a waterside promenade, an adult fitness area, a dog run, a garden that incorporates historic rail tracks on the site with vegetation, and a small beach, plus a 13,000-square-foot pavilion with room for an elevated café plaza and comfort stations. 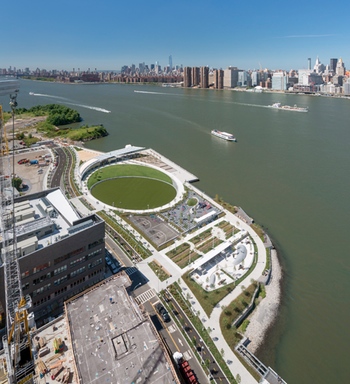 The park's opening is the first part of "Phase 1" of the development—the mayor's offices says that next year the first two residential buildings will open, with a combined 925 "permanently affordable" apartments and roughly 17,000 square feet of new retail space. A new 1,100-seat school is also in the works, and Phase 2 is expected to feature 1,000 units of housing "with a minimum of 50-60 percent of the units designated as permanently affordable and approximately 28,000 square-feet of community/commercial space."

The waterfront park was designed with an eye toward rising water levels. "In order to ensure that the park is prepared for the impacts of climate change, the design allowed for a significant augmentation of the shoreline, employing bulkheads and riprap to better withstand the possibility of future flooding from the East River," the mayor's office said in a statement. And that's not all:

Sixty-four photovoltaic panels located on the roof of the pavilion will generate 37,000 kWh per year, powering over 50 percent of the entire park. Additional panels can be installed over the remainder of the roof to provide 100 percent of the park’s operating power. The pavilion also houses LEED Silver-certified public restrooms, maintenance and office space, and a future food concession.

The park cost $66 million, including the roadways and related infrastructure, with financing coming primarily from the city’s Department of Housing Preservation and Development. The Federal Highways Administration also kicked in $1.56 million for roadway development, and the New York City Council (Council Member Jimmy Van Bramer) hooked up $320,000 for natural turf in the park.

Queens residents are already enjoying the park. Dennis Peros, who lives in Bayside, told us, "It’s beautiful… I’m just here playing with my girls. It looks great, I mean, I remember what this area looked like before. Pepsicola used to be down at the end, this was years ago. This was weeds, this was nothing, just weeds. The place has grown; I mean, luxury apartments, nice basketball courts, nice field turf for the kids to play ball, a playground... I think it’s fantastic."

#Hunter's Point South
#long island city
#original
Do you know the scoop? Comment below or Send us a Tip