Yesterday, the NY State Police confirmed media reports that Diane Schuler, the 36-year-old woman who had driven on the wrong side of the Taconic State Parkway—killing herself, her 2-year-old daughter, and three young nieces as well as three men in an SUV—was drunk and high. The NY Times explained the details of the toxicology report, "She had a blood-alcohol level of 0.19 percent, and even more alcohol still in her stomach, so fresh that it had yet to be metabolized. There were high levels of a chemical found in marijuana, enough to pinpoint her last use at 15 minutes to an hour before her death in the worst traffic accident in Westchester County in 75 years." 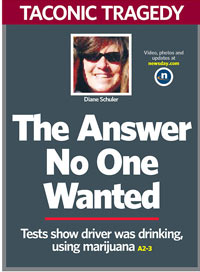 The amount of alcohol the 5'2" Schuler apparently ingested was equivalent to 10 drinks. The Post reports that Westchester DA's office toxicologist Betsy Spratt said that Schuler "would have had difficulty with perception, with her judgment, with her memory. Around that level of alcohol, you also start to get tunnel vision," and combined with marijuana, "those effects are intensified." State police captain Arthur Boyko said, "It's a tragedy no matter how you look at it. I'm not going to judge her. I was surprised by the toxicology report. Here it is 1:30 p.m. on a Sunday with a family en route back from a vacation, and here we have several families that have been devastated by her actions."

While Schuler's family and her brother's family have not commented, the family of two of the SUV's victims spoke out. Roseann Guzzo, whose father Michael Bastardi, 81, and brother Guy Bastardi, 49, were killed, along with family friend Daniel Longo, 74, told the Journal News, "This is another blow to us. It's crazy. It doesn't make any sense. I can't fathom someone doing that. Everybody is mad. Everybody is angry. Every time I talk, I get more mad."

And her brother Michael Bastardi Jr. spoke to WABC 7, "It's disbelief right now. How someone could jump in a car put five kids in the car and drink? We want to figure out what happened," and said the earlier speculation that Schuler missed the correct road because of signs was ridiculous, "I mean blaming signs and blaming this and that, it didn't make sense from the beginning. Something caused her to do that, now we know. She got on the ramp, cars were pulling over, beeping the horn, trying to warn her. You keep going?"

The Post created a map and timeline of Schuler's drive from a campground in Parksville, NY to Westchester County. Schuler's husband had left the campground at 9:30 a.m. and said his wife seemed fine, as did the campground's owner, who told the Daily News, "I got pretty close to her and waved goodbye. If she had alcohol in her breath, I would have smelled it." And Schuler's neighbors in West Babylon were in shock: One mother who recalled Schuler as a loving mother said, "I've never seen her drink, I've never seen her smoke. I don't believe that. There has to be another explanation."

The Times says the news "also raised questions about the police investigation"—the state police initially said about the July 26 crash, “At this point in our investigation, we have no reason to believe that Diane Schuler was intoxicated or impaired by drugs in any way," only for the toxicology report to refute that, as well as the news that there was a 1.75 Absolut Vodka bottle in Schuler's van. The Times reports, "Officials said that the bottle, pieces of which were scattered around the minivan, was not found immediately after the accident, in which the minivan was completely charred."

The police hope to interview Schuler's family members, including her 5-year-old son who survived the crash, again. The deaths of Schuler's 2-year-old daughter and nieces, as well as the Bastardi father and son and Longo are classified as homicides.

The filing in an ongoing case urges the court to block the initiative from being implemented, calling it a violation of New Yorkers’ constitutional rights.

The filing in an ongoing case urges the court to block the initiative from being implemented, calling it a violation of New Yorkers’ constitutional rights.

By
Bahar Ostadan
and
Michelle Bocanegra
MTA Says No-No-No to booze during SantaCon
By
Kerry Shaw
As NYC housing crisis worsens, Mayor Adams calls for 500,000 new units by 2032
By
Elizabeth Kim
NYC's Metropolitan Opera is under cyberattack
By
Olivia Ebertz
Get the news New Yorkers need in your inbox