The inflections embedded in a tabloid headline are, in many ways, the voice of New York: All caps! Outrage! Exuberance! Puns! Certain themes are frequently repeated: Infamy, glory, redemption. And the range of characters can, at times, tend toward the narrow: Heroes or bums.

These tropes are worked the hardest on the paper's backpage, gateway to the sports section. That's no coincidence. A hundred years ago, the tabloids honed their approach to the news by covering one of the biggest personalities in the country's modern history, a Yankees slugger of gifts so sublime that, according to one sports scribe, he could attain a "perfection so glorious it was almost painful." Then, when the hero's dark side finally leaked into public view, editors who'd been cultivating (and protecting) the player’s persona realized scandal sold as many papers as tales of exquisite athletic achievement.

The player was Babe Ruth.

Author Jane Leavy says Ruth and The New York Daily News, the country's first tabloid, all but invented each other. "The tabloid was not specifically created for him but it might as well have been," Leavy told Gothamist/WNYC. Ruth first appears on the back page of The News on January 7th, 1920, the day he de-trains in New York to play for the Yankees. (The Red Sox, his previous team, have shipped him off for cash in what is, to this day, baseball’s most boneheaded deal.) Ruth will seldom depart the back page, that golden patch of celebrity-making real estate, until he retires from baseball after 22 seasons in 1935.

"He is the most photogenic character to come along to that point in American history," according to Leavy, author of the recent biography Big Fella: Babe Ruth and the World He Created. According to Leavy, the tabloid press's defining feature and innovation was the primacy of image over words. "You could capture his swing, you could capture the upward tilt of his chin as he followed the flight of the ball, you could capture him heading toward first base with that pigeon-toed gait," Leavy said of her subject’s dynamism. The papers could not get enough of him. 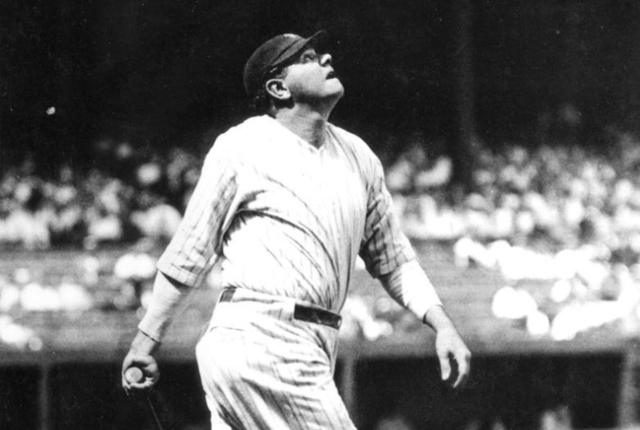 Ruth burst on the scene in the middle of baseball's existential crisis. The year before, gangsters had paid players to throw the World Series. Worse, the style of play at the time was to eke out runs in low-scoring games, like the sporting embodiment of the grind-it-out Protestant work ethic.

Ruth turned the sport upside down. He cashed in bunches of runs by swatting homers, baseball's version of the get-rich-quick scheme. Fans slung nickels at newsies to snap up the tabs' breathless recaps of Ruth's first 54 home run season in 1920 — more home runs than any team that year. Ruth radiated prowess on the ballfield and, off it, the glow of mounting fame. One sportswriter compared his domination of the back pages to "Moby Dick in a goldfish bowl."

To capture a story so large, Leavy said, The Daily News invented a new kind of camera. “It was called the ‘Big Bertha,’ which was named after a German howitzer from World War I,” she said. “It had an extra long base and an extra long bellows and was fitted out with a lens three times longer than the standard.”

The camera could produce panoramas of the field, allowing fans to see how a game’s action had unfolded in an age before radio broadcasts. Several tabloids rushed to copy it, as they’d copied the concept of the back page itself, and used their Big Berthas to offer shots showing the full home-plate-to-bleachers arc of Ruth’s titanic clouts.

The good times rolled until 1925, when word got out about Ruth's mistress. "She was a woman named Claire Hodgson, who was a showgirl in New York," Leavy said. "He'd been carrying on with her for years." For the same number of years, the city's many tabloid reporters and editors had been protecting this, and other, of Ruth's secrets. But the dam had broken. Soon the back pages were reporting on all of Ruth's appetites: for hot dogs, for women, for speakeasy booze.

Ruth's story, as told by the tabs, had been crucially complicated from 'hero' to 'hero with flaws.' Any dramatist would attest, that's the better story. And so it has been since the Bambino's death in 1948 at age 53. The papers went on to take the same template and used it to crown, and sometimes dethrone, ever more sports royalty: DiMaggio and Mantle, A-Rod and Jeter, Muhammad Ali and Serena Williams. The list goes on.

At its mid-century height, the Daily News had 2.7 million daily readers. For decades, its sports staff exceeded a hundred people. But not anymore, thanks to the vacuuming up of ad revenue by platforms like Google and Facebook, says former editor-in-chief Jim Rich.

"When I joined the Daily News sports department in 2004, we were at about 60 people,” Rich recalled. “And when I was editor-in-chief just this last year, it was diminished but it was still at about 35.” Then came January of this year, when the paper slashed staff again and not only fired its sports editor but eliminated the position. “I think we're talking about fewer than ten people in that department now," Rich concluded.

The Daily News still competes with The New York Post, but lacks Rupert Murdoch’s money to keep the traditional rival from thriving. The News is also besieged on all sides by an expanding army of sports blogs and websites, from Deadspin to The Athletic to SB Nation. Even if The Babe were to return from Valhalla and enter the Yankee line-up, it probably wouldn’t be enough to recapture the city’s golden era of tabloid sports coverage.

Jim Rich used to tell his staff that a tabloid headline, photo, and story should communicate with clarity and force: "Like a punch in the nose." He'd also quote columnist Jimmy Breslin about how, in a paper like The Daily News, "a little bombast never hurt anyone."

That's precisely the quality that is going, going ... not quite gone: The punch-in-the-nose voice of New York, talking sports.