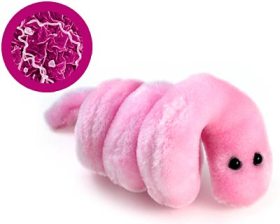 According to the Daily News, there were 260 new cases of the syphilis in NYC during the first quarter of 2007 compared with 128 cases during the same [period last year.

The Department of Mental Health and Hygiene says most infections occurred in gay men in Chelsea (10 were reported in women); Assistant Commissioner Dr. Susan Blank said, "We are seeing more of the serious outcomes of unsafe sex." The city rate - 7.2 cases per 100,000 citizens - has been generally high as of late: Last year's infection rate was greater than double the national rate. The Gay Men's Health Crisis tells the Sun that they will run advertisement to encourage syphilis screening.

Syphilis is a sexually transmitted disease caused by a spirochete, a spiral-shaped bacterium similar to the type that causes Lyme Disease. Though easily cured with penicillin, if untreated the disease can go on to cause severe neurological and cardiovascular complications.

And in other news:

Image of the Pox/Syphilis plush from Think Geek