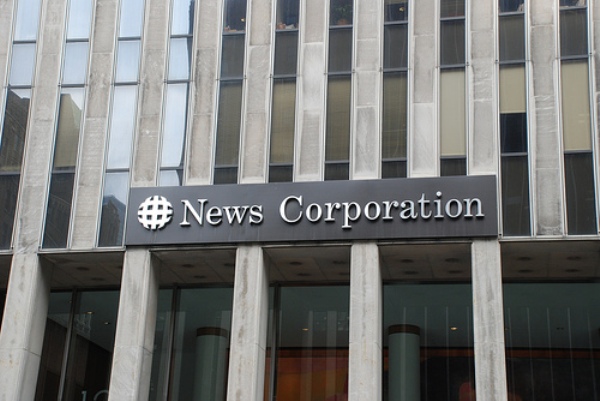 Photograph of News Corp.'s Midtown headquarters by Triborough on Flickr

What's interesting is it seems like WSJ staffers would welcome a move to Midtown. The World Trade Center attacks happened blocks away and the WSJ needed to relocate for over a year; one employee told the Times, "People are more than ready" to move to Midtown. Another plus for Midtown is that it's close to the commuter stations. However, the Observer pointed out News Corp.'s building is "already filled to capacity."

As for editorial moves, Murdoch wants the Wall Street Journal to add a sports section - which makes us envision WSJ reporters fighting with Post reporters for the perfect scoop about how crappy the Knicks are - and a magazine targeting the affluent. Because Murdoch loves those dollars from affluent goods advertisers! The magazine will be edited by Times of London's high-end magazine editor, Tina Gaudoin, who has worked for Vogue, Harper's Bazaar and Tatler. At any rate, we can't wait for the synergies to percolate into the WSJ reporters making appearances on Good Day New York.