"I don't care about any pizza. Fix my apartment," said 29-year-old Jimar Harry, sitting in the terrazzo-floored lobby of 805 St. Marks Avenue in Crown Heights on Wednesday night. The Regional Vice President of Akelius Residential Property—a Swedish investment firm with an international portfolio of properties valued in the billions—had just walked in with a stack of steaming pies, trailed by the new building manager.

On September 23rd, a crew of landscapers had come to the four-building complex without notice and uprooted a five-story tree from the central courtyard. Last Friday, fresh grass was rolled out in raised beds, and a central concrete sculpture was planted with white and purple flowers. The perimeter of the courtyard is now flanked with manicured shrubs.

Meanwhile, longtime regulated and stabilized tenants throughout the 200-unit building have waited months for their new management company to address ceiling leaks in bathrooms and kitchens; two tenants have been without refrigerators for over a month; and another says black sludge bubbled into his bathtub in September and wasn't fixed for over a week.

"Instead of hiring new landscapers you could have put that money into repairs that need to be done," said Christa Atken, a tenant of two years, addressing management from the middle of a crowd of dozens of tenants. "Because it's almost winter. We're not going to be out there kicking it and throwing barbecues. But inside we're trying to use our bathrooms and showers and heat up our rooms and stay warm." 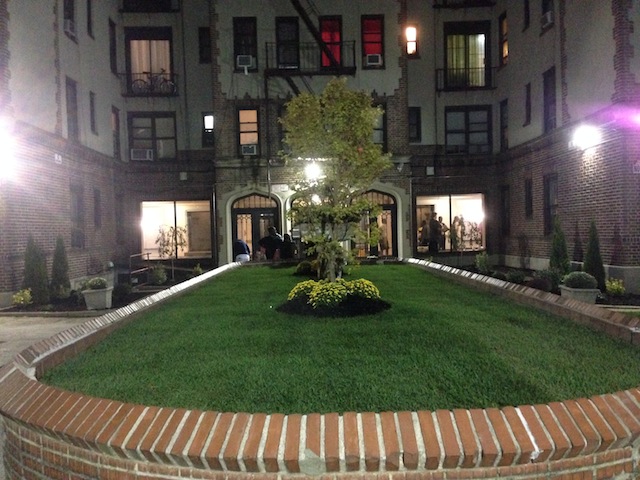 As of last fall, Stockholm-based Akelius had a portfolio of 44,450 international properties, valued at about $6 billion. The investment firm made its U.S. debut this spring, purchasing 1153-1159 President Street in Crown Heights, and 144-150 Ludlow Street in Manhattan. Its U.S. portfolio has since expanded to more than 900 units in NYC, the majority of them rent-regulated.

Akelius paid $44 million for 805 St. Marks in May—a hefty profit for the previous owners, Pinnacle and Praedium Groups, which bought the property for $22 million in 2013 and managed a lucrative flip after two years of what current tenants describe as minimal repair work.

That month, Regional VP Kunal Chothani told Real Estate Weekly that Akelius is planning to hold onto 805 St. Marks for at least ten years. Still, sizable investments anticipate sizable returns. "Crown Heights is a strong location with a positive outlook for the future," he told the news outlet. "Its accessibility to Lower Manhattan within 30 minutes by public transport is one of the driving factors for the positive development of the neighborhood."

Three workers currently handle maintenance issues for the entire four-building complex, while four others are dedicated to sweeping the common areas. Chothani blames tenants for "quality of life issues... whether it's throwing trash out of the windows or vandalizing the common areas."

"The great fear is that all of these so-called renovations and repairs aren't for us, for anyone who lives in the building," said Joel Feingold, a tenant of six years and member of the Crown Heights Tenants Union (CHTU). "This has been [Akelius's] model in other cities."

Internationally, Akelius has a reputation for buying up apartments in need of repair, conducting renovations, and raising rents to cater to a wealthier pool of renters. Last August, elderly tenants in an Akelius-owned Berlin apartment complex pushed back against renovations that would have raised their rent as much as 60%. And this spring in Toronto, Tibetan refugees living in an Akelius mid-rise protested rent increases that Akelius justified with renovations and increased security.

At 805 St. Marks Place, every unit is stabilized or regulated, and rents range from $700 to $1,700 per month. Still, loopholes in New York State's recently renewed rent laws, which allow for increases when an apartment is renovated or vacated, have many tenants nervous. 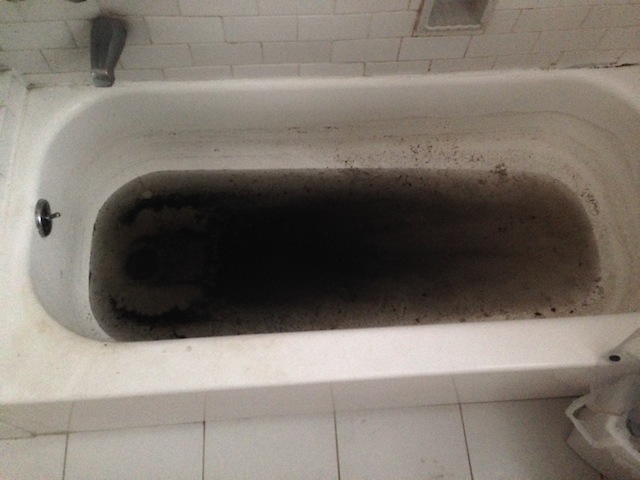 One tenant, who preferred to remain anonymous, took this picture of his tub on September 4th. He says the black substance that bubbled up through the drain was not addressed for eight days.

According to Chothani, the purpose of last night's meeting was to update tenants about plans to fix the elevators, and install security cameras and a key-fob system. Building manager Jeffrey Herskovitz assured the group that he had hired an outside contractor to do so-called "cosmetic" improvements, like retiling the floors in apartments. He emphasized that the boiler had been recently repaired, and will be in working order for the cold months.

But within minutes of calling order, dozens of tenants raised their hands, describing unaddressed repair issues that they deem more important than cosmetic and common-space improvements.

"I have a leak that left a hole in my ceiling in the kitchen and bedroom," said one first floor tenant who preferred to stay anonymous. "The kitchen backs up, and overflows, so my kitchen floor is a complete mess. But even if they come do the cosmetic work, if the water backs up again I'm going to end up with the same problem."

"We're all intelligent people here," said tenant Nana-Ama Kyerematen, who says that she had water leaking from her bathroom ceiling for three weeks before management addressed it. "We all work to pay rent. We just want accountability. Everyone's issue is that when something is broken, it doesn't get fixed and it doesn't get addressed."

Chothani later told us that electric and plumbing repairs are his "next priority," but was unable to provide a rough timeline for the work.

Twice over the course of the last two weeks, management has put up notices around 805 St. Marks telling tenants with in-unit washer-dryers to remove them, arguing that soapy water is overburdening the old piping system.

Herskovitz told tenants last night that half of his maintenance workers' time is spent cleaning up after these machines, adding that nearly 80 satellite dishes drilled into the roof are letting in rain water, exacerbating the leakage. He's placed a moratorium on their installation.

Some tenants retorted that the sudden crackdown on washer-dryers and satellite dishes, in addition to the the surprise landscaping, is a form of tenant harassment. They demanded e-mail alerts before any work is done to the common spaces, and for management to repost relevant phone numbers and e-mail addresses for tenants with maintenance issues.

"It's loud and clear that communication needs to change very quickly," said Chothani at the end of the meeting, visibly exasperated. "We will do that."

Speaking with us afterwards, he stressed his local roots, independent of his multi-billion-dollar Swedish employer. "We're all local people," he said, gesturing to the building manager and supervisors. "We eat the same pizza. We're just trying to do the right thing."

"I don't think anything is going to be accomplished," said Natherlene Bolden, a tenant of over 30 years, on her way out of the meeting. "In August I threw my refrigerator out. There were roaches coming in. They sent a [repairman] a couple of weeks ago, and then I didn't hear anything. Tonight, they claim that in two days I'll get one."

During the meeting, Bolden had stood up from her seat, pointing a finger at Chothani. "I don't know how they do it in Sweden or in Canada, but this is Brooklyn," she said. "You're working from the outside and you're doing nothing for the inside, so you can put it on the screen in your office and say '805 St. Marks.' And it will look beautiful."

#805 St. Marks Avenue
#Crown Heights
#gentrification
#renovations
#original
Do you know the scoop? Comment below or Send us a Tip