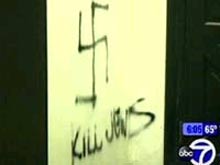 Last night, two synagogues, three buildings, and a two cars in Brooklyn Heights were found with swastikas painted on them. The NYPD is investigating the incidents as bias crimes, and this comes after last Friday's discovery of swastikas and other graffiti on a Williamsburg yeshiva's bus.

The Brooklyn Heights Synagogue and Chabad, both on Remsen Street, had swastikas on their staircases, while the apartment building at 45 Columbia Place had a four-foot swastika with "Kill Jews" written under it. Two other buildings on Columbia Place were also defaced, as were some cars. The police, who have been investigating since last night, have not made any arrests yet.

A real estate agent who lives in one of the Columbia Place building told WABC 7, "It's irrational and it's sad, but I don't think it has anything to do with me. I'm Irish. I've lived here all my life and I've never seen anything like this."