The awful swastikas and "Go Trump" spray-painted onto playground equipment at a Brooklyn park have been painted over. A reader sent us the above photograph, adding, "The paint is still wet."

The park, Adam Yauch Park, is named after the late Beastie Boys member who grew up in neighborhood. The vandalism was found yesterday afternoon, and City Councilman Brad Lander tweeted, "Yet more hatred & anti-Semitism from Trump supporters. Swastikas on the playground equipment in Adam Yauch Park in BK Heights." 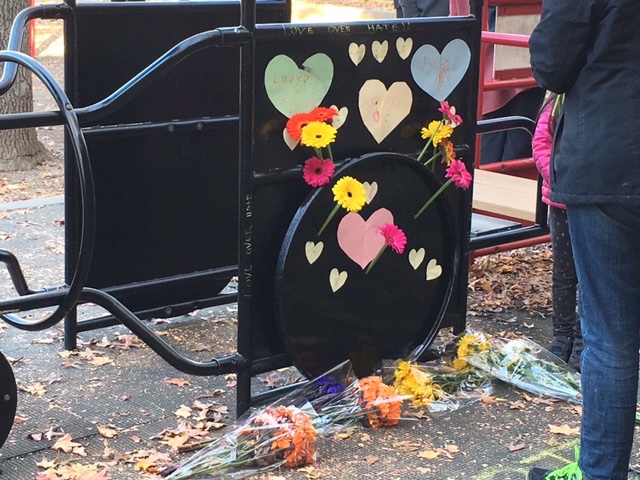 The incident is being investigated by the NYPD. Tomorrow at 11:30 a.m., political leaders, including State Senator Daniel Squadron, Congresswoman Nydia Velázquez and City Councilmembers Stephen Levin and Brad Lander, as well as community and faith leaders will come together to stand against hate in Brooklyn, New York City and the country.

Hate crimes have increased in the city this year, and according to the NYPD, there's been an uptick in swastika-related hate crimes as well. NYPD Chief of Detectives Robert Boyce told DNAinfo that there have been 13 reports of someone having drawn a swastika in public this year compared to just two over the same time last year. When asked if Trump's presidency was related to the increase, Boyce said, "I can't explain it... We had one incident where his name was used in a swastika out of 13."

Trump took time to condemn the thoughtful plea of the @HamiltonMusical cast. But not the swastikas in his name in a Brooklyn playground. https://t.co/3Qiibsm1wa

#adam yauch
#adam yauch park
#brooklyn
#donald trump
#hate crime
#president-elect trump
#swastika
Do you know the scoop? Comment below or Send us a Tip
A new Gothamist is coming! We’ve moved comments over to our beta site. Click here to join the conversation and get a preview of our new website.