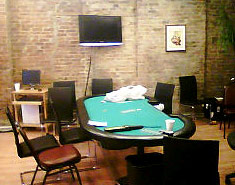 We have to say this much: If you're a high profile poker club, you're probably an obvious target for robbers. The Daily News reports that The National CardRoom was robbed early Friday morning, ordering the club and patrons to fork over their dough. The robbers, who had guns, fled the Upper East Side club with $50,000.

The irony is that the club's manager was arrested after the club reported the robbery. Edgar Concepcion was "charged with promoting gambling and possessing book-making supplies" - d'oh! We wonder if any celebrities were victims of the robbers: Back in 2005, the News revealed A-Rod visited an earlier incarnation of the club ("Ace Point Backgammon Club and Chess Studio"). Also in 2005, Robert "AJ Soprano" Iler was there during a police raid. According to some reports, there are many underground clubs all over the city.

And a cute fact about the club, which operated on East 61st Street, above the Shouva Israel Yeshiva: One yeshiva teacher said, "When we come in during the morning, you can here them moving chairs. You'll hear someone go 'Wow' when they win." Ahh, we can just imagine Captain Renault saying, "I'm shocked, shocked to find that gambling is going on in here!"