by Jen Chung
[UPDATE BELOW]

A woman walking on a Brooklyn sidewalk with her boyfriend was fatally struck by a driver last night. Apparently an SUV driver jumped the sidewalk because he wanted to avoid hitting a bus.

According to the police, the incident occurred just before 5:30 p.m.: A 2004 Chevrolet Suburban was heading eastbound on Fulton Street in Fort Greene when, at South Portland Street, the driver "swerved to the right in order to avoid hitting the vehicle in front it." The 5,300-6,100 pounds vehicle barreled into Victoria Nicodemus, 30; her 37-year-old boyfriend; and another 75-year-old female pedestrian.

Nicodemus was pronounced dead at Brooklyn Hospital; her boyfriend and the other pedestrian are in stable condition.

A witness told the Daily News, "The bus stop was right there. He didn’t realize it was stopping. The driver went up on the curb trying to avoid it .... He was going pretty fast.”

Another, Andy Timothy, said to the Post, "The bus was at the bus stop. I heard a boom. I knew something bad had happened... One lady was in really bad shape. Blood was pouring down her face. It was brutal.”

Video and photographs from the scene show the dented front of the Suburban; PIX11 reported that Nicodemus's Christmas lights and hat are atop the SUV's hood. 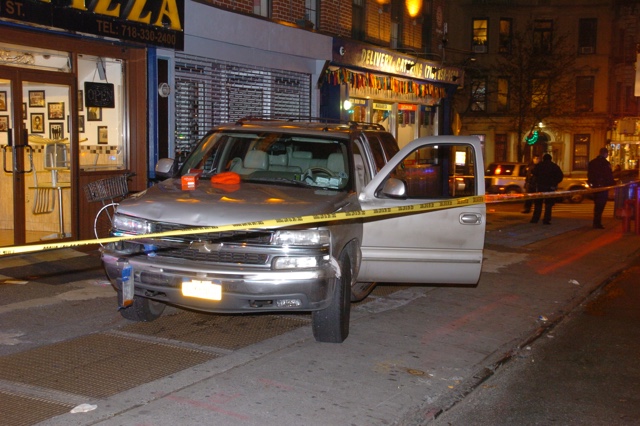 Other pedestrians and store workers tried to help Nicodemus. Timothy explained, "I wouldn't want that to happen to me or my family."

Jesus WTF. An SUV just jumped the curb and ran a bunch of people over in my #ftgreene neighborhood... for the 2nd time in 2 years.

NBC New York has surveillance footage of Nicodemus and her boyfriend walking down the street before being struck:

Nicodemus, who lived in Brooklyn Heights, was an art curator at Indiewalls. Her brother told the News, "She was an incredible young woman. “She was the light of our lives. Honestly one of the most beautiful souls."

Two years ago, a 9-year-old boy was killed and three others were injured by an out-of-control SUV driver just a few blocks away at Clermont and Dekalb. The driver was charged with criminally negligent homicide.

We are horrified by the news that an SUV driver jumped a Brooklyn curb Sunday, killing 30-year-old Victoria Nicodemus and injuring four others. Outrageously, this is the 20th fatality this year caused by an out-of-control driver careening onto a sidewalk, where New Yorkers are supposed to be safe from traffic.

Brooklyn District Attorney Ken Thompson must prosecute this case to full extent of the law and send a strong message that reckless driving will not be tolerated. Given that driver Marlon Sewell has been charged with operating his car without a license, we also call on state lawmakers to take action on State Senator Michael Gianaris’ legislation to toughen penalties for motorists who kill while driving without a valid license.

Though the NYPD Collision Investigation Squad is still at work on the case, eyewitness accounts suggest the SUV driver was speeding. The NYPD must continue to step up speed enforcement consistently across all precincts. In addition, New York City must be able to deploy more automated speed enforcement cameras than the 140 currently allowed under state law, and those devices should be able to be operational outside school zones, and at all times of the day or night.

#brooklyn
#cis
#fort greene
#pedestrian fatality
#Victoria Nicodemus
Do you know the scoop? Comment below or Send us a Tip