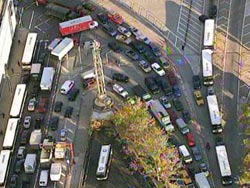 The race to get out of NYC through the Lincoln Tunnel was painful yesterday afternoon into evening as authorities investigated a suspicious package on I-495 West. MyFoxNY reports that the section right have the Weehawken exit was shut down between 4 p.m. and 7 p.m. And after it was cleared up, there was another hour or two of residual delays!

The suspicious package was a bottle. It turn out to be harmless, but the AP reports there was another incident on Wednesday when "tunnel traffic was diverted to local roads for several hours due to two bottles filled with an unidentified liquid that were found not to be hazardous."

Besides car traffic being diverted on local NJ streets, all those commuter buses headed from Port Authority through the tunnel were also held. Think about it--being stuck on a Shortline bus for hours. To those people leaving bottles near the tunnel: The traffic karma gods will exact payback.