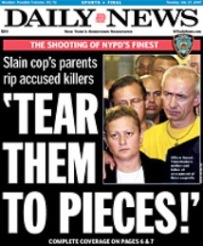 One of the saddest images from yesterday were the parents of slain police officer Russel Timoshenko, weeping at Brooklyn criminal court after the arraignment of the three men accused of Timoshenko's murder. The suspects, Dexter Bostic, Robert Ellis, and Lee Woods, were arraigned last week on charges including attempted murder. It is believed that Bostic, firing from the front passenger seat, shot 23-year-old Timoshenko in the face and neck during a July 9 traffic stop (Ellis allegedly fired at police officer Herman Yan; Woods was the driver). Timoshenko had been on life support since the shooting and was declared dead on Saturday.

Brooklyn prosecutor Anna-Sigga Nicolazzi told Judge Richard Allman, “Your honor, this is the third time in the last seven days that we’ve been before this court for the purpose of arraigning these defendants on charges of trying to kill two police officers. Unfortunately, I stand now before you upgrading these charges: the defendants were regrettably successful in their crime.”

After the three suspects were led away, police officers and Timoshenkos applauded (the Daily News reported one "female cop taunted the suspects, calling them 'F---ing pieces of garbage.'"). Leonid Timoshenko said of the suspects, "They should be torn apart." Patrolmen's Benevolent Association head Patrick Lynch urged that the case move from the Brooklyn DA's to the federal prosecutors, because NY State doesn't have the death penalty. However, the U.S. Department of Justice has repeatedly said the Brooklyn DA's office will handle the case.

The Daily News has state parole transcripts from Ellis's and Bostick's earlier attempts to be freed from prison. In one, Bostick, jailed for robbery, said he was unlucky to have taken a ride with two other men who he claimed were the real robbers: "I accepted a ride from somebody. I should have taken public transportation and I wound up in prison."

There is a wake for Officer Timoshenko today and tomorrow,at the I.J. Morris funeral home, 1895 Flatbush Avenue, Brooklyn, between 4PM and 9PM. The funeral is on Thursday, also at I.J. Morris, at 9:30AM, with the burial at Moravian Cemetery on Staten Island.