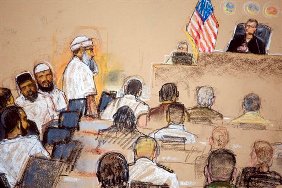 Khalid Sheikh Mohammed, who federal authorities accuse of proposing and overseeing the September 11, 2001 attacks on the U.S., appeared in a military courtroom today at the Guantanamo Bay Naval Base in Cuba. Mohammed said he would represent himself and, when told he could face the death penalty if convicted, "Yes, this is what I wish, to be a martyr for a long time. I will, God willing, have this, by you."

Today was Mohammed's formal arraignment (others accused in conspiring the attacks were also formally charged). He was captured in 2003, and the Pentagon says his involvement with the attacks includes "proposing the operational concept to Osama bin Laden as early as 1996, obtaining approval and funding from bin Laden for the attacks, overseeing the entire operation, and training the hijackers in all aspects of the operation in Afghanistan and Pakistan."

The former third-in-command at Al Qaeda has been in U.S. custody since his capture and he did undergo waterboarding, which his defense said could have impaired his cognitive abilities. In the courtroom, the AP reported that Mohammed "sang verses from the Quran" before being asked to stop by the judge. The Pentagon has claimed Mohammed has confessed to his involvement, even feeling sorry for killing so many people.

For more, the Lede is liveblogging the hearing and has some background about circumstances around the case.