The man accused of killing the head of the Gambino crime family on a residential Staten Island street last week appeared at his extradition hearing in New Jersey with QAnon symbols written on his hand. Anthony Comello, 24, also doodled other things: "Mr. Comello held up a palm on which he had scribbled 'United We Stand,' and 'M.A.G.A. forever,' as well as a circle and 'U.S.A.,'"according to the New York Times.

Comello was arrested in Brick, New Jersey, on Saturday and agreed to waive extradition in order to face looming charges in New York related to Frank Cali's murder. Cali, 53, the reputed leader of the Gambinos, was gunned down by a pickup truck driver according to video footage—right outside his house—around 9:15 p.m. on March 13th. The footage also showed Cali talking to the truck driver, who had apparently crashed into Cali's Cadillac SUV, and then taking a license plate from the driver before the driver shot him 10 times.

Cali's death, the first mob boss hit since Paul Castellano was shot and killed in 1985, raised questions about whether there was a mob civil war afoot. Soon investigators found fingerprints on the license plate that reportedly match Staten Island resident Comello's, which were submitted for a rifle permit. 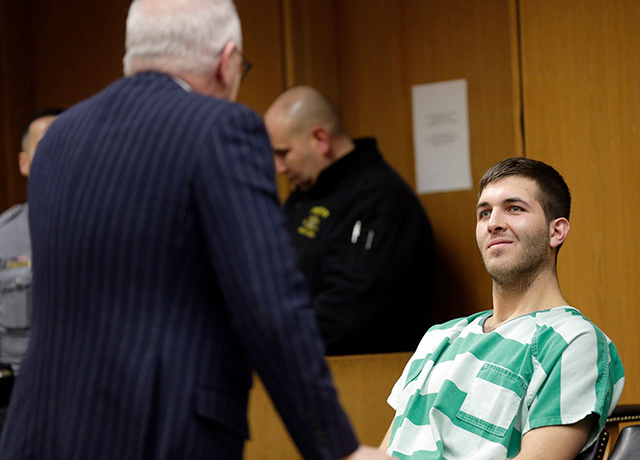 Comello appeared to have written on his palm with a ballpoint pen before being brought into the Ocean County Courthouse in Toms River with his hands cuffed and shackled to a leather belt around his waist.

He showed off the handiwork while seated in the jury box before the judge entered, smirking as he turned to face the reporters and government workers who packed the courtroom.

A court officer who noticed Comello holding his hand out asked why he was doing it.

“Why not? I’m handcuffed,” he answered.

Comello's New Jersey lawyer, Brian Neary, apparently didn't see what Comello had on his hands because told the Daily News, "He had nothing I saw written on his hands. There were no pictures on his hands. This was a relatively short court proceeding where his rights were explained to him." In

Neary added, "Today's proceeding was a waiver. Anthony has agreed to give up his right to a hearing in New Jersey and return to Staten Island to face the charges. Anthony is resolute and willing to go back to New York to face these charges."

Police sources speculate that Comello may have been upset at Cali because Cali did not want him dating Cali's niece. (The niece was reportedly at Cali's home the night of the shooting.) According to the Times, "Mr. Comello told detectives on Saturday that he had a romantic interest in one of Mr. Cali’s female relatives and that Mr. Cali had told him to stay away, the officials said. He also said that he was high on marijuana at the time and shot Mr. Cali because he feared the crime figure had a gun and would shoot him."

However, the Staten Island Advance reports that there may yet be a mob angle: "In the past, shot-callers in the world of organized crime have hired mercenaries to carry out hits, which authorities said was the case in the 2018 slaying of Lucchese associate 'Sally Daz' in the Bronx, said Scott Bernstein, an organized crime historian and true crime author. 'Using buffers and cutting direct ties after a job, whether it be a hit or other forms of (organized crime) activity is standard mob protocol,' said Burnstein."

Comello's New York lawyer, Robert Gottlieb, said, "Because of serious threats, he has been placed in protective custody where he will remain while this case is pending."

#anthony comello
#frank cali
#gambino
#maga
#mob
#murder
#qanon
#staten island
Do you know the scoop? Comment below or Send us a Tip