Suspect In 1979 Etan Patz Murder Has Schizophrenia And Hallucinations, Says His Lawyer Yesterday, Pedro Hernandez was formally arraigned for the 1979 murder of six-year-old Soho resident Etan Patz. Etan's disappearance, which launched a nationwide movement to find missing children, had been one of the most infamous cold cases in NYC history, and Hernandez's arrest was the first time anyone had been charged with the crime. However, Hernandez is under psychological exam and suicide watch at Bellevue Hospital—his lawyer Harvey Fishbein said, "[Hernandez] has a long psychiatric history that includes auditory and visual hallucinations and delusions."

Fishbein has also said that his client is schizophrenic and bipolar, raising more questions about whether the 51-year-old NJ resident—a married man witha 20-year-old daughter who confessed to police on Wednesday—is telling the truth. Manhattan DA Cy Vance said yesterday, “This is the beginning of the legal process, not the end. There is much investigative and other work ahead, and it will be conducted in a measured and careful manner." There is no body and, it seems, very little physical evidence to tie Hernandez to the murder.

The NY Times' Jim Dwyer wrote yesterday, "The law enforcement official involved in the case said that investigators were now trying to find reasons to trust Mr. Hernandez’s story. Why would a man with no known history of pedophilia or murderous impulses lure a boy into a bodega basement and strangle him?" An official said, "He doesn’t give any motivation in the statement. The admission was totally unsolicited." And the Daily Beast's Michael Daly reports, "Detectives who questioned Hernandez on Wednesday and Thursday are said to have asked him his motive. His reply, they said, is that he had no motive, or that perhaps he acted because Etan reminded him of his least-favorite nephew." 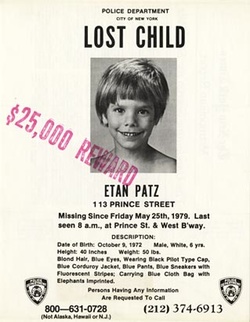 Etan disappeared when walking from his parents' loft on Prince Street near Greene Street to the school bus stop at West Broadway and Prince. Hernandez, 18 at the time and a stock boy at a bodega on West Broadway, claims he lured Etan to the bodega's basement with the promise of a soda, strangled him, and then disposed of his body in a bag, leaving it outside 113 Thompson Street. Etan was about 50 pounds in 1979; a longtime Soho resident told the Wall Street Journal, "I was thinking of the garbage man, picking up a bag and thinking this feels strange. I guess if you pick up a thousand bags a week, you don't notice." While the Sanitation Department says it is cooperating with the investigation, an unnamed official told the WSJ, "New Yorkers throw out heavy stuff all the time, it was all big black bags—heavy black bags. It's not at all a stretch for a container to have 50, 75 pounds of material in it. You've got a worker who's picking up hundreds of stops in a night."

Hernandez allegedly confessed to relatives over the years about killing a boy in New York City, but with the recent renewed interest in the case, a relative contacted the NYPD with a tip. The tipster may have been his brother-in-law, who told WCBS 2 that now the Patzes "don’t have to suffer anymore in waiting whether he’s alive, or what happened, or who killed him."

A friend of Hernandez's told the Post that when the boy went missing, "Every day, we were all out looking for Etan — everyone except Pedro... We would meet every morning, our posse with our bikes, at the jewelry store across the street from the" bodega. Roberto Monticello claims, "Pedro would just stand outside, looking at us, watching. Looking back, it seems strange. Everyone was searching. But he didn’t... He was tightly coiled — you wouldn’t want to get him angry...He was the kind of guy you just knew, even as a kid, that one day he’ll lose it. He’ll just blow up, hit someone, stab them, whatever."

Still, Monticello admitted, “We all thought Jose Ramos did it. Jose was the one you kept your eye on, the one that disappeared after. Nobody really even thought of Pedro." Ramos, now in prison for an unrelated child molestation case, had told investigators he grabbed a boy who might have been Etan and tried to molest him, but let him go. Ramos was found responsible for Etan's death in a 2004 civil case, and Etan's father Stanley Patz reportedly sends Ramos a copy of Etan's missing poster, with the words "What did you do with my little boy?" typed on the back.

Hernadez had been questioned, though not thoroughly, in 1979. The Times reports:

One investigator who has worked on the case at different times, though not in the first few years after Etan’s disappearance, said it was his understanding that detectives had initially talked to Mr. Hernandez, as they had to many people who worked or lived in the immediate area. But the investigator said that like other workers in the bodega, Mr. Hernandez had provided no useful information.

And because other parents at the bus stop and people in the area reported that they had not seen Etan arrive at the bus stop, there was less focus on the bodega, which was only a few steps away, the investigator said.

The investigator also noted that the Police Department’s culture at the time was far different; detectives were far less assiduous about documenting all of their work in reports known as DD5s, in which they were supposed to detail the results of their investigation and interviews.

In the Daily Beast, Daly makes this observation: "Perhaps so much so that Etan aroused whatever cruelty and anger and lunacy that Hernandez may have had pent up. Hernandez would have needed only a moment to exercise the greatest power anyone can wield, the power to take a life. Or maybe Hernandez was taking drugs. Or maybe he really is just nuts. He apparently nonetheless had enough of his wits about him to dispose of the body. And he said nothing when Etan's panicked father, Stanley Patz, came in to the bodega that afternoon showing a contact sheet of head shots he had taken of Etan and asking if anyone had seen his son."