Suspect Arrested For Slashing Woman In The Face On Chelsea Sidewalk

Thanks to a tipster, police arrested a man suspected of attacking a woman walking on West 23rd Street in Manhattan yesterday morning. The victim, Amanda Morris, posted photographs of her injury on Facebook, explaining, "Today was a difficult day that I never thought I would have to go through, I was simply in the wrong place at the wrong time and put in an unfortunate situation, but I would like to do what I can now to raise awareness."

Morris, a 24-year-old Brooklyn resident, had been walking on the north side of West 23rd Street, between 6th and 7th Avenues, to head to her job at the Whole Foods on 7th Avenue at West 24th Street. She didn't have any contact with the suspect before he struck. "It was unprovoked and I did not have any association with this man prior to the incident, we have never seen each other before," Morris wrote on Facebook. 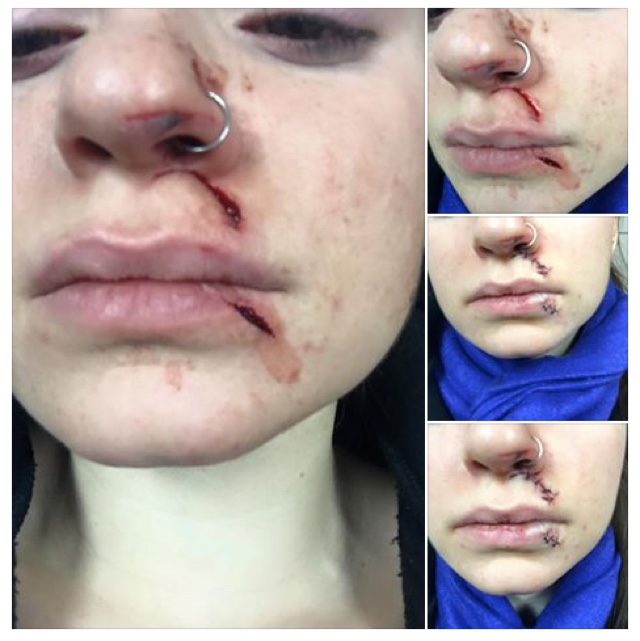 Amanda Morris posted these photos to her Facebook page, "Today was a difficult day that I never thought I would have to go through..."

She also told WABC 7, "He was kind of stumbling around. I could tell that he didn't really have anywhere he was going specifically. He was just kind of out there, waiting for something. I guess waiting for me." She also said she considered crossing the street because he seemed "weird...but you don't think these things are going to happen to you."

Morris didn't realize her face had been cut. She told the NY Post, "I felt like I got punched in the face. It was like, oh that’s weird, why would someone punch me? Suddenly, blood was all over my hands, and I started crying." The Post reports:

Feeling faint, Morris ducked inside the Malibu Diner, where workers gave her a towel for her gushing wound.

“They looked at the cut and said it’s definitely caused by a knife or razor — it couldn’t have possibly been done by somebody’s hand,” she said.

“I was freaking out, and I didn’t really know what to do.”

A diner employee took her to the Whole Foods, where Morris’ supervisor called the cops.

In the evening, around 6 p.m., police say that a man walking near St. Patrick's Cathedral recognized the suspect "from a surveillance video he had seen on television. The male called 911 and began to follow the suspect. As he followed the suspect, the male came upon two New York City Police Department Mounted Officers and advised them of what was going on. The mounted officers called for assistance and officers from the Midtown North precinct took the suspect into custody."

Kari Bazemore, 41, of the Bronx, was arrested and charged with felony assault and criminal possession of a weapon. He apparently has been arrested 32 other times, and the Daily News notes, "In 2013, he was arrested for forcible touching in Manhattan and was charged with grand larceny last February. On Dec. 30, the career criminal was busted for randomly punching a woman on East 8th St."

On Facebook, Morris also wrote, "I want everyone to know that I did have a bad feeling about this man as soon as I saw him. His walk was irregular and he appeared under the influence by his body language and stance. Always, always trust your gut instincts. Even in a safer neighborhood such as Chelsea you should always stay alert and aware of your surroundings. Had I crossed the street this could have been avoided; never feel that you have to stay in an uncomfortable situation out of politeness/fear/etc."

#amanda morris
#assault
#Chelsea
#random attack
#slashing
Do you know the scoop? Comment below or Send us a Tip