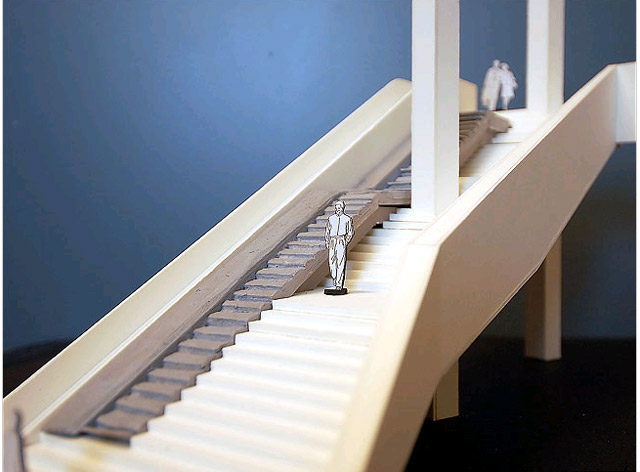 Day One doesn't mean everything changes, but Governor Spitzer's administration has now offered a new idea for the so-called survivors' staircase at Ground Zero. The NY Times reports that the stairs would be kept "whole and intact" and "set into a long flight of steps leading from the visitors’ center at ground zero to the underground World Trade Center memorial museum, which is to open in 2009." And the Times has this picture of the model!

The survivors' staircase, which led to Vesey Street in the old WTC, was named an endangered place by the National Trust for Historical Preservation, which noted how the staircase "provided a path of escape for hundreds of individuals." The NTHP even suggested that people write letters to WTC developer Larry Silverstein to ask him to incorporate the stairs into the design one of the new buildings.

Only the stairs themselves, and not the structure around it, will be moved. Avi Schick, the Spitzer-appointed head of the Lower Manhattan Development Corporation said with the new placement, visitors would experience "the path of travel just as someone else experienced it...The stairs are a potent reminder of the path to salvation and survival that many people had. We were able to separate what the stairs mean from what the structure means.” And of the Pataki administration plan that would have kept some stair treads in Tower 2 and other used elsewhere, Shick said, "The plan we walked into was an embarrassment to government." Hmm, is it weird for him to mention embarrassments to government these days?

The proposal still needs to be reviewed and approved by official agencies - as well as weather comments from other survivors' and preservation groups - but the New York Landmarks Conservancy and WTC Survivors' Network thought the design worked. WTCSN's Richard Zimbler said, "The most important elements of the stairway are those parts that look like a stairway. And that’s exactly the proposal: to preserve all the steps.”

What do you think of placing the staircase at the museum? If anything, it's strange it wasn't proposed to be moved to the museum earlier. Last week, it seemed that one idea for the survivors' staircase temporary home during construction was a barge off Governor's Island.