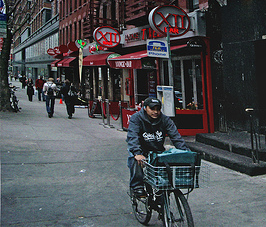 An observational study by Hunter College students has concluded that when it comes to traffic regulations, cyclists are incorrigible scofflaws. Students spent October observing 3,000 cyclists chosen at random at 69 locations throughout the five boroughs; they found that only 43 percent of all cyclists stopped at red lights, and roughly 14 percent did not use designated bike lanes, which is not required by law. City law does require children under age 14 to wear helmets, but the study determined that less than half do so. Also:

But Ben Fried at Streetsblog says, "the findings are presented in a way that feeds into the worst stereotypes about cyclists and a blame-the-victim mentality toward traffic injuries and deaths. Another way to view the Hunter College findings is that rates of traffic violations among cyclists are symptomatic of a system designed mainly to accommodate cars. In other words, cyclists follow the rules more when they feel safe." Reached for comment, Wiley Norvell, a spokesman for Transportation Alternatives, an advocacy group for cyclists and pedestrians, said:

"To our eyes, this isn't just about personal behavior, this is about streets that are dangerous and not serving all the people who use them. Well-designed streets give us behavior we want. A good example is 9th Avenue in Chelsea, where there is now a protected bike lane.

The DOT has found that accidents have declined dramatically there, and bike riding on the sidewalk has [decreased] about 80%, from 5% of bike riders using the sidewalk to 1%. So this first-generation of new street designs is showing how far we can get in reducing these traffic infractions."

, Norvell added, "Obviously it’s incumbent for cyclists to obey the laws: They have the same rights and responsibilities as pedestrians and motorists. The most important rule is to yield to pedestrians, always, no matter what. It gets under my skin if a bicyclist doesn’t yield to a pedestrian."

#bike
#hunter
#law
#rules
#safety
#study
Do you know the scoop? Comment below or Send us a Tip