Since his GOP debate dust-up with Mitt Romney, Rick Perry has found the need to distinguish himself from the rest of the candidates with a bold, zesty platform for his campaign. He thinks he's found it in a 20% flat-tax rate and the ability to file your taxes on a "postcard" (as opposed to "the internet"). But like Herman Cain's 9-9-9 plan, the flat-tax idea is just another laser-guided bullet through the heads of us poor and middle class coyotes (bear with us).

Perry announced his "Cut, Balance and Grow" plan in the Wall Street Journal, and noted that while he would close "corporate loopholes and special interest tax-breaks," he'd completely negate the benefit by promising to "eliminate the tax on qualified dividends and long-term capital gains." He also wants the budget to be no more than 18% of the country's GDP, which hasn't happened since the 1960s. When it came close to being 18% was "through soaring tax receipts during the roaring economy of a dozen years ago." He also wants to lower the corporate tax rate to 20%, though if enforced, may be an improvement.

In an excellent (read: illuminating and cripplingly depressing) interview with John Harwood of the Times, Perry is asked if it's a good idea to give the wealthy "hundreds of thousands, maybe even millions of dollars" more. "I don't care about that," he says. "What I care about is them having the dollars to invest in their companies. Americans, I hope, aspire to be wealthy." Not anymore!

To the Occupy Wall Street protests, Perry tells "those young people" to enjoy freedom of speech, "But at the end of the day America's about having the opportunity to take care of your family." Something that those "young" protesters know absolutely nothing about.

To give you an idea of how little the people in the upper 81-100th income percentiles need Perry's tax breaks, here's a chart from the CBO demonstrating that the wealthy have benefitted far more from the "rising tide that lifts all boats" from 1979 to 2007. But wait, what are those people in Zuccotti Park protesting, anyway? 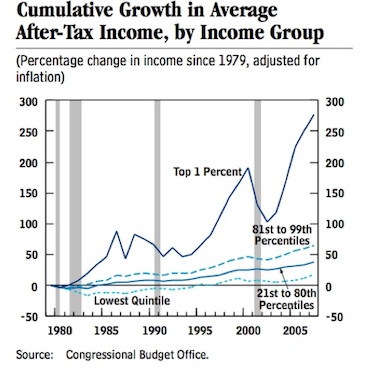