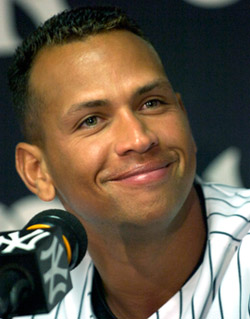 In news that isn't coming as a surprise to anyone, Alex Rodriguez, the former and probably future Yankees 3rd baseman, was named the American League Most Valuable Player today. It was the third time Rodriguez was named the MVP, winning previously in 2003 with the Rangers and in 2005 with the Yankees. This past season, A-Rod set career high marks in runs scored (143) and RBI (156). He also led baseball with 54 home runs and hit .314. With Rodriguez winning, a member of the Yankees has been named MVP 22 times.

While Rodriguez easily won the award, voting by the Baseball Writers Association of America was not unanimous. Detroit Tigers outfielder Magglio Ordonez received two first place votes and Rodrriguez received the other 26. Vladimir Guerrero, David Ortiz, and Mike Lowell round out the rest of the top-five vote getters.

Rodriguez, who is close to signing a 10-year, $275 million contract with the Yankees, says that he has unfinished business in New York. And if you're wondering how he fell into the good graces of the Steinbrenners again, it was easy. All he did was say, "I'm sorry." That and fly down to Florida to meet them without his super-agent Scott Boras.

In other baseball news, Tom Glavine is heading back to Atlanta. The 41 year-old southpaw agreed to a one-year $8 million contract with the Braves. Other reports say the Mets have agreed to a contract with 2nd baseman Luis Castillo. The contract is reported to be worth $25 million over 4 years.