Would it surprise you to learn that a very small percentage of the city's luxury high rise buildings are using the bulk of the energy? A new report for the Climate Works For All Coalition finds that just two percent of the city's tall buildings account for 45 percent of its total carbon footprint.

The study breaks down the top offenders by Energy Use Intensity (EUI) per square foot. A median EUI of a multi-family residential building is 126, and an EUI over 206 puts a building in the 90th percentile for worst emitters. So bearing THAT in mind: 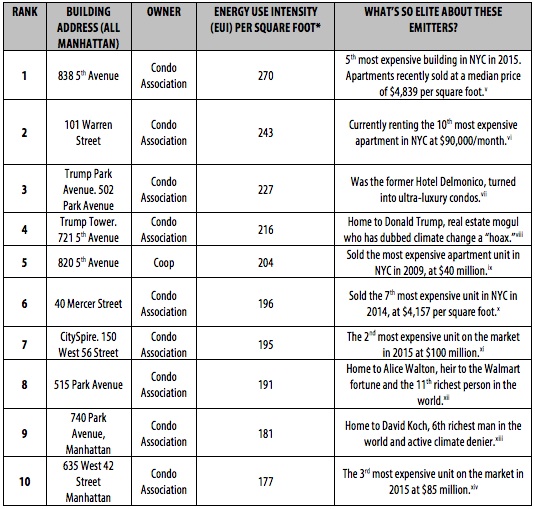 Future President and Terrorism Prophet Donald Trump owns two of the properties (and lives in one or both or all of them), as does David Koch, who is worth $43.6 billion and has poured at least some of that money into denying climate change.

In the inevitable event of a catastrophic power outage, luxury highrises will quickly transform into luxury tombs, which...doesn't really matter. The residents of Billionaire's Row will have long lifted off for the banks of St. Tropez anyway.