While Uber's taxi service may have been phased out of New York City, its car service arm remains—and in the past week, it has come under scrutiny for its surge pricing.

According to Hunter Walk—who has written a great, lengthy explanation on how the service works—"Their secret sauce, as CEO Travis K will note, are their algorithms which attempt to minimize response time. They do this through routing (where should drivers be) and a pricing model which allows prices to 'surge' during periods of intense demand such as holidays and weekend evenings." So when Hurricane Sandy hit, they put their surge pricing into effect.

One tipster who used the service last week tells us he was charged $219 for a 7.67 mile, 46 minute ride, from the Upper East Side to DUMBO. Normally this ride (in an Uber SUV) would have cost around the $110 mark: $57 for duration, $38 for distance, and $14 for the base fee. Last week, while mass transit was still barely working, the total ended up being $219. 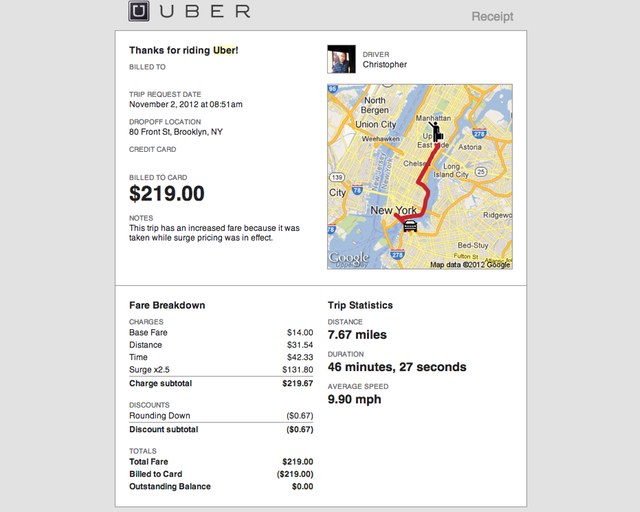 Their surge prices fluctuate year round—according to TechCrunch on New Year’s Eve it was 6.25x the amount, and "after Sandy, prices in New York were only at 2x." The above receipt shows a 2.5x surge charge—this was from November 2nd, one day after Uber reinstated their surge pricing, which they very briefly waived under the circumstances until realizing it was not a sustainable model. When they sent out their release on November 1st, they explained the reinstatement:

"We will be reverting back to standard Surge Pricing for riders. It is a hard decision, but one we feel strongly about. Without raising the price, there will be less than ½ the number of drivers on the system with several times more demand on far fewer drivers. Without Surge Pricing, Uber would become essentially unusable this week. For those needing a ride this week, it’s going to be expensive... During this emergency price increase, Uber will waive all of its own fees with 100% of the fare going directly to the drivers helping New Yorkers move around the city."

So, while it's nice they are giving all of the fare to their drivers, is this just a tool for gougers during a time of crisis?

#car
#gouging
#hurricane sandy
#surge fee
#surge pricing
#transportation
#uber
Do you know the scoop? Comment below or Send us a Tip