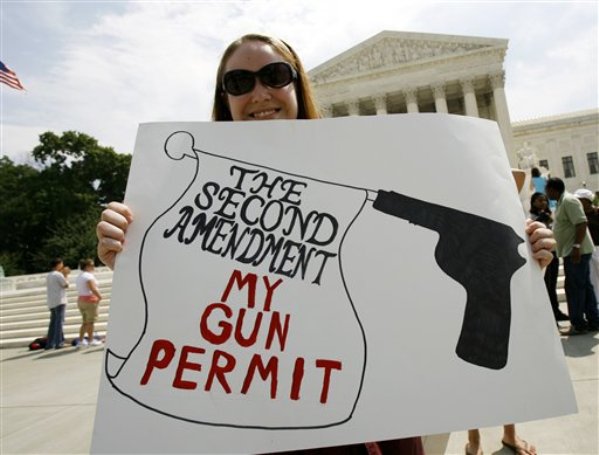 The Supreme Court ruled that Washington D.C.'s ban on handgun ownership is unconstitutional; per the Times, the five of the court's nine justices found "the Constitution protects an individual’s right to have a gun, not just the right of the states to maintain militias."

Majority opinion writer Justice Antonin Scalia wrote, "The enshrinement of constitutional rights necessarily takes certain policy choices off the table. These include the absolute prohibition of handguns held and used for self-defense in the home.'' However, in one minority opinion, written by Justice John Paul Stevens, said the majority opinion “would have us believe that over 200 years ago, the framers made a choice to limit the tools available to elected officials wishing to regulate civilian uses of weapons."

And another minority opinion, written by Justice Stephen Breyer, questioned what the Constitution's framers meant, "The self-defense interest in maintaining loaded handguns in the home to shoot intruders is not the primary interest, but at most a subsidiary interest. The Second Amendment's language, while speaking of a 'militia,' says nothing of 'self-defense.'"

The majority opinion did say laws regulating gun ownership (like not allowing felons to own them or prohibited concealed guns) could stand. Mayor Bloomberg, who has been an outspoken opponent of illegal hand guns, said:

"From the beginning, we have said that fighting illegal guns has nothing to do with the Second Amendment rights of Americans. Today's decision by the Supreme Court upholding those rights will benefit our coalition by finally putting to rest the ideological debates that have for too long obscured an obvious fact: criminals, who have no right to purchase or possess guns, nevertheless have easy access to them. Mayors and police chiefs have a responsibility to crack down on illegal guns and punish gun criminals, and it is encouraging that the Supreme Court recognizes the constitutionality of reasonable regulations that allow for us to carry out those responsibilities."

Senator John McCain issued a statement praising the decision and referring back to Senator Barack Obama's bitter gun owner comment. Obama also reacted, supporting the decision because he too agrees that the Second Amendment allows gun ownership, but "Justice Scalia himself acknowledged that this right is not absolute and subject to reasonable regulations enacted by local communities to keep their streets safe."

#constitution
#d.c.
#mayor bloomberg
#right to bear arms
#second amendement
#supreme court
Do you know the scoop? Comment below or Send us a Tip