Brett Kavanaugh is currently being evaluated for a lifetime appointment as Donald Trump's hand-picked Supreme Court nominee. His character is expressly of interest as to whether he is fit for such a prestigious, elevated job—and a Supreme Court position is still a job, regardless of the honor—which is why reports that he sexually assaulted a woman in high school are so disturbing and relevant, despite the amount of time that has since passed (the timeline argument is a particular ghastly talking point for certain Republicans).

Now, there are new reports pertaining to his character, and his general attitude toward women, stating that it was "not an accident" that Kavanaugh's female law clerks all "looked like models." That information even came from one of Kavanaugh's biggest supporters.

The Guardian reports today that Yale professor Amy Chua, who wrote the bestselling book on hardcore parenting Battle Hymn of the Tiger Mother, made those comments privately to a group of law students last year. Chua, who wrote a piece for the WSJ earlier this year publicly endorsing Kavanaugh as a "mentor to women," was instrumental in providing Kavanaugh with many of the judge's clerks over the years. But the advice she and her husband, fellow Yale professor Jed Rubenfeld, gave also made some law students uncomfortable with their emphasis on looks.

One source said that in at least one case, a law student was so put off by Chua’s advice about how she needed to look, and its implications, that she decided not to pursue a clerkship with Kavanaugh, a powerful member of the judiciary who had a formal role in vetting clerks who served in the US supreme court.

In one case, Jed Rubenfeld, also an influential professor at Yale and who is married to Chua, told a prospective clerk that Kavanaugh liked a certain “look”.

“He told me, ‘You should know that Judge Kavanaugh hires women with a certain look,’” one woman told the Guardian. “He did not say what the look was and I did not ask.”

The source says that Chua invited a group of students that she mentored to a bar last year to catch up and discuss their plans for clerkships, which led to a discussion about #MeToo and allegedly abusive and harassing behavior by another judge, Alex Kozinski, who was forced to retire from the bench last year after more than a dozen women accused him of harassment.

The conversation then turned to Kozinski’s protege and good friend Kavanaugh, who one source said was a familiar name even though he had not yet been nominated to the high court. Chua allegedly told the students that it was “no accident” that Kavanaugh’s female clerks “looked like models”. Student reacted with surprise, and quickly pointed out that Chua’s own daughter was due to clerk for Kavanaugh.

A source said that Chua quickly responded, saying that her own daughter would not put up with any inappropriate behaviour. 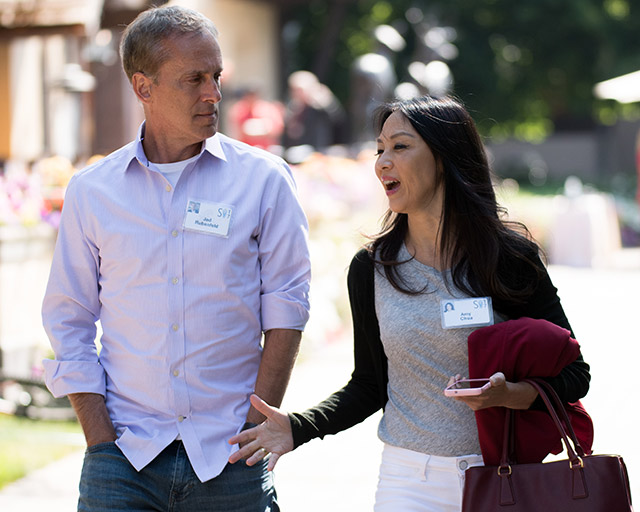 An unnamed Yale Law School student, possibly the same one who spoke to The Guardian, told HuffPost the same story, adding that she considered it a “yellow flag."

Rubenfeld took care to warn her about two judges in particular: First, Alex Kozinski, then a judge on the U.S. 9th Circuit Court of Appeals, was known to sexually harass his clerks, he told her. (Kozinski retired in December amid accusations of harassment.)

The other was Kavanaugh. Though the judge was known to hire female clerks who had a “certain look,” Rubenfeld told her, he emphasized that he had heard nothing else untoward.

“He did not say what the ‘certain look’ was. I did not ask,” the woman said. “It was very clear to me that he was talking about physical appearance, because it was phrased as a warning ― and because it came after the warning about Judge Kozinski.”

The woman added that she was not sure if Chua was giving this advice to others, but, "she did, however, say that she offers members of her small group the ‘opportunity’ to send her photos so she can help them figure out what to wear for interviews.” Chua did not deny any of the report in her response to HuffPost, saying that, “For the more than ten years I’ve known him, Judge Kavanaugh’s first and only litmus test in hiring has been excellence."

Chua has cancelled her classes at Yale this semester and has been hospitalized for an unidentified illness. The Guardian notes that Rubenfeld is currently the subject of an internal investigation at Yale focused on his conduct, particularly with female law students. They add, "Students have also raised related concerns to Yale authorities about Chua’s powerful influence in the clerkships process."

(In a statement regarding the internal investigation, Rubenfeld said, "For some years, I have contended with personal attacks and false allegations in reaction to my writing on difficult and controversial but important topics in the law. I have reason to suspect I am now facing more of the same. While I believe strongly that universities must conduct appropriate reviews of any allegations of misconduct, I am also deeply concerned about the intensifying challenges to the most basic values of due process and free, respectful academic expression and exchange at Yale and around the country.")

As Jezebel put it, "it’s clear Chua was suggesting women show off their 'assets' in the hopes of receiving a clerkship with Kavanaugh. It’s yet more proof that women can be complicit in and prop up dangerous systems that allow predatory behavior to become the norm."

But this isn't the only story about Kavanaugh and Yale to emerge today: the Yale Daily News reports that while Kavanaugh was a student there, he was part of a fraternity, Delta Kappa Epsilon, "notorious for disrespecting women."

As more and more of these types of stories come out, it lends added credence to critics' questions about Kavanaugh's credibility. The Washington Post gave "three Pinocchios" to Kavanaugh for waving off questions about his use of stolen Democratic memos. Senators like Claire McCaskill say they won't vote for him because of his bias against limits on campaign donations. "Judge Kavanaugh will give free reign to anonymous donors and foreign governments through their citizens to spend money to interfere and influence our elections with so-called 'issue ads,'" she wrote.

And this all comes as the toxic rhetoric around his accuser, Christine Blasey Ford, reaches new heights of absurdity: Washington Post columnist Kathleen Parker wrote a piece seriously wondering if Kavanaugh had a doppelganger in high school who sexually assaulted Ford (...and also hung out with Kavanaugh's friends? It makes no sense). Accused pedophile Roy Moore has come to Kavanaugh's defense, while false viral rumors meant to discredit Ford are being spread around the Internet.

Last night's statement by Grassley's Chief Counsel that he's "determined" to "confirm judge Kavanaugh" is also notable in light of Grassley setting Friday as the deadline for Ford to respond.

Gee, I wonder why she might suspect this process is a sham. https://t.co/s20WHFmYYk

Dr. Ford passed a lie detector test and asked for an FBI investigation. Will Judge Kavanaugh do the same?

Republicans and Democrats continue to debate when (or whether) Ford should be able to testify about her accusation, while Ford has been forced to go into hiding as she has been bombarded with death threats and harassment thanks to Twitter and Reddit trolls doxxing her.

Mazie Hirono tells ABC that Chuck Grassley's claim that Republicans have done everything they can to contact Dr. Ford "is such bullshit I can hardly stand it." pic.twitter.com/cPUr0EeI0R

#amy chua
#brett kavanaugh
#creepy
#jeb rubenfeld
#supreme court
Do you know the scoop? Comment below or Send us a Tip