The U.S. Supreme Court issued two long-awaited rulings on Thursday, voting to uphold partisan gerrymandering, while thwarting—for now—the Trump administration's efforts to include a citizenship question in the census.

The court, which now has a 5-4 conservative majority, ruled that the constitutionality of partisan gerrymandering—a strategy for redrawing district lines that Republicans have employed to reshape the balance of political power in recent years—was not a matter for the courts to decide. In his decision, Chief Justice John Roberts argued that the two cases related to gerrymandering brought before the court were "political questions beyond the reach of the federal courts."

In a statement, House Judiciary Chairman Jerry Nadler called the practice of gerrymandering "fundamentally corrosive to democracy," adding that he was "very disappointed" by the ruling.

This is a fundamentally anti-democratic decision, but it reflects the fact that the conservative ideological project in the united states can only proceed by entrenching countermajoritarian procedural advantages rather than popular support from the people themselves.

On the matter of asking about citizenship on the census, Robert joined with the court’s more liberal justices, ruling that the Commerce Department's stated justification was not sufficient. The decision, which sends the case back to a lower court, represents a major setback for President Trump—and one that SCOTUS observers did not necessarily expect.

Roberts echoed the findings of three separate district judges, who'd previously ruled against the citizenship question's inclusion, but did not explicitly say it was unconstitutional. Plaintiffs in New York and elsewhere had argued that the Trump administration’s push to ask about citizenship was motivated by "racial animus," with the goal of diminishing the power of cities with large immigrant populations by discouraging non-citizens and minorities from filling out the form.

The government has not asked about citizenship status on the once-in-a-decade questionnaire since 1950. Beginning in 2017, the Trump administration started claiming the question was necessary to enforce the Voting Rights Act. That reasoning, Roberts wrote in his decision on Thursday, “seems to have been contrived.”

"If judicial review is to be more than an empty ritual, it must demand something better than the explanation offered for the action taken in this case," Roberts wrote. While the decision did not close the door on the government returning with a more coherent explanation, the Trump administration would have to provide that reasoning ahead of the July 1st deadline for printing the census forms, which is an enormous logistical undertaking.

Looks like an unexpected, limited win for citizenship question opponents in Census case. A surprise. #SCOTUS

#SCOTUS block census citizenship question for now, remanding it in a complicated decision that essentially states that the Trump admin’s reason for adding the question was pretextual. Wow. Didn’t expect this after the argument.

In recent weeks, new evidence has emerged suggesting that the administration's goal of adding the question was, in fact, a racist power play. Files recovered from the computer of the deceased Republican operative Thomas Hofeller—"the Michelangelo of gerrymandering"—confirmed that he had studied the issue in 2015, and found that asking about citizenship would discourage millions of people in largely blue states from filling out the form. 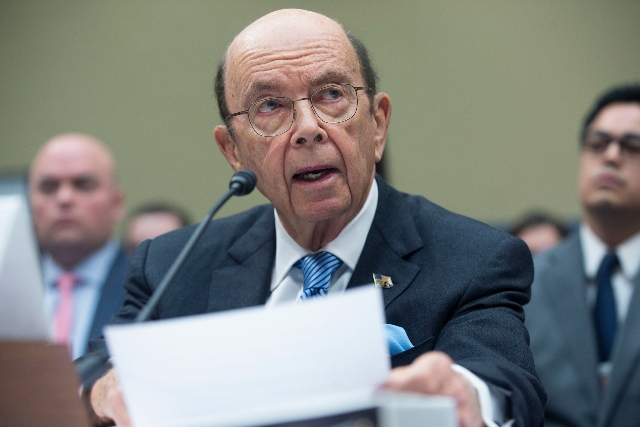 US Commerce Secretary Wilbur Ross testifies before a House Oversight and Reform Committee hearing that addressed the citizenship question in March. (MICHAEL REYNOLDS/EPA-EFE/Shutterstock)

Prior to his death last summer, Hofeller urged the Trump administration to adopt the question, and then penned a portion of the Justice Department letter arguing it was needed to enforce the Voting Rights Act. Trump's Commerce Secretary Wilbur Ross, who oversees the Census Bureau, has since asserted that this was just a coincidence.

By the administration's own math, as many 6.5 million people would not respond to the census if it included a citizenship question. The discrepancy would have profound impacts on Congressional representation and the allocation of federal funding.

"I want to know why this question was magically added after we have seen that a political operative knew and detailed an intent to intimidate racial and immigrant communities for a partisan purpose, saying, ‘This will hurt Democrats and help Republicans,’" said Rep. Alexandria Ocasio-Cortez during a House Oversight Committee earlier this month. “I want to know about the racism and the very disturbing history that we’re seeing here. That’s what I want to

Neither the Justice Department nor President Trump--who as recently as April called the census "meaningless" without a citizenship question--have responded to today's rulings yet.

After the decision was released, Attorney General Letitia James issued a statement, "Every single person in this country deserves to be counted, plain and simple. We are pleased with the Supreme Court’s decision today. This one question could have caused a substantial undercount, particularly of noncitizens and Latinos. Thanks to the Court, the census will remain a tool for delivering on our government’s promise of fairness and equity, and states, like New York, will not be shortchanged out of critical resources or political representation. Our democracy withstood this challenge, but make no mistake, many threats continue to lie ahead from the Trump Administration and we will not stop fighting. Now, more than ever, the marginalized, the disenfranchised, and everyday people need us to stand firm in our fight for justice. After all, everyone counts, and therefore, everyone must be counted."

James also appeared at a press conference in Foley Square, telling the crowd, "Every single person in this country deserves to be counted, plain and simple. And today’s Supreme Court decision makes sure that will happen. Despite the Trump administration’s attempt to divide our nation, the people have won."

We won’t back down.

See you in court. https://t.co/nxWwVz5mYu

#census
#citizenship
#gerrymandering
#supreme court
#trump
Do you know the scoop? Comment below or Send us a Tip