Support for a Bloomberg Presidency 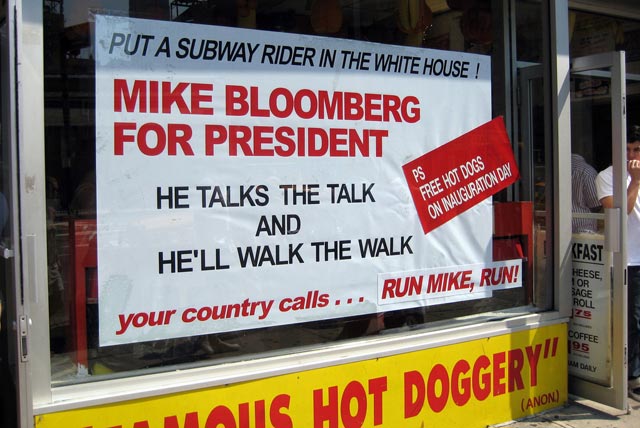 A Northwestern University sophomore has a column in student news magazine North by Northwestern titled I propose President Bloomberg. Ben Armstrong even refers to the current term limits battle:

Though New Yorkers have reservations about abolishing term-limits to allow Mayor Bloomberg to continue his reign without inhibition, describing it as a benevolent dictatorship, a Bloomberg presidency would not be one. In fact, since no members of Congress would feel obliged to support him (and his advisers would be bipartisan), there would be significantly more checks on his actions.

College kids and their dreams! The reality is Bloomberg ain't running for president, just Emperor/ Czar/ King of New York.

And, speaking of checks on actions, the Observer wondered what happened between Bloomberg's January 17 announcement of creating a Charter Revision Commission--which could tackle issues like...term limits -- and last week, when he said it was too late to to put term limits on this year's ballot. Bloomberg claims he was too busy, but given there have been third term rumors since April...

You can sign up to testify at the City Council's hearing about term limits this Thursday (October 16, 1 p.m.) here.

#City Council
#mayor bloomberg
#term limits
#third term
Do you know the scoop? Comment below or Send us a Tip