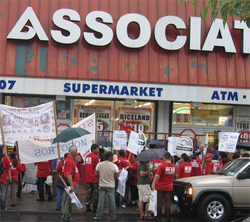 You know those sad little plastic cups of loose change at the supermarket checkout you never drop money into because, what, now you have to tip grocery baggers too? For some baggers, that's their only source of income. Yesterday two executives at an Associated supermarket in Bushwick—which workplace justice activists have been protesting against for years—were arrested on charges that they've cheated workers out of more than $300,000 and falsified business records to cover their tracks.

Attorney General Andrew M. Cuomo told reporters the executives paid no wages to supermarket baggers and that other employees received a weekly salary of $300 for 70-hour weeks, which amounts to $4.29 an hour. (New York's minimum wage is $7.15 an hour.) Tomacina Nunez, a bagger at the store since 2004, tells the Times she often worked an 11-hour day, taking in between $12 and $30 in tips.

The two executives, Bienvenido Nunez and Martin Duran, are also accused of providing the state with fake payroll records that falsely showed employees working a normal 40 hour week. On top of that, they're charged with filing false documents with the state Unemployment Insurance Fund in order to pay less in unemployment insurance taxes. In addition to the criminal charges, Cuomo’s office has filed a civil lawsuit against the supermarket to collect $600,000 in back wages and penalties for more than 30 workers.

#arrested
#associated
#baggers
#brooklyn
#bushwick
#knickerbocker avenue
#lawsuit
#supermarket
Do you know the scoop? Comment below or Send us a Tip