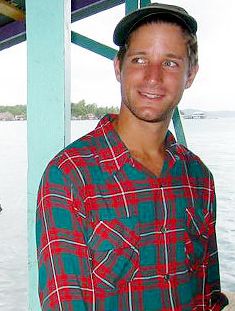 Last weekend a mystery surfer saved the life of Brian Jordan, who was struggling in the water 100 yards off the shore of Coney Island. The story surfaced with a photo on the cover of the Daily News late last week (a surefire way to crack the case) and lo and behold, the mystery man has been unmasked...or rather, outed by his family. Turns out the hero is humble, and just a bit shy of the spotlight.

"He's a great guy and it's an amazing thing he did and actually I'm not surprised that he would do it," said Kenn Christianson, the brother of Campion's stepmother, Sonya Campion. "He's just not sure he wants the attention to be on him."

"He told his sister that several people had spotted the man in trouble, but no one wanted to go in," Campion's mother wrote in an e-mail. "The conditions were very rough, and Kevin knew he would have [a] long ways to go to get the man to shore."

The Daily News dug up more tidbits on the surfing superhero; he's a professional sailing captain, a biologist, he's studied poisonous frogs in Central America, surfed the world, saved numerous other folk from a watery grave, and, yes, he's single (and on MySpace). The Seattleite was making his way from Florida to Maine when he briefly, and serendipitously, stopped over in New York. Jordan, who is now recovering, says at the very least he'll email Campion his thanks.

Photo of Kevin Campion via the Daily News.

#Brian Jordan
#coney island
#drowning
#hero
#Kevin Campion
#mystery
#surf
#surfer
Do you know the scoop? Comment below or Send us a Tip