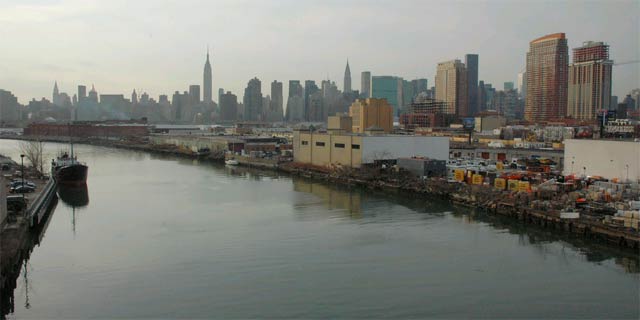 Yesterday, Representatives Anthony Weiner and Nydia Velazquez held a press conference to ask the EPA to name Newtown Creek a Superfund site. The lawmakers want federal funding to speed up the slow progress on the cleanup of millions of gallons of oil that began in the 1940s and 1950s. Weiner said in his press conference that if the current rate of cleanup were to continue, it might not be done until 2026.

It's believed that the spill is around 30 million gallons--that's 11 million more gallons than the Exxon Valdez--and covers over 50 acres. Per the Representatives' press release:

The [Superfund] designation would trigger a lengthy four-point process. First, the site would undergo immediate stabilization, which includes a one-year clean up to stop any immediate threats to the community, if necessary, such as erecting a security fence or repairing a hazardous waste storage unit. Then the EPA would perform a comprehensive investigation of the site and analyze cleanup options. Traditionally this takes months to years. The EPA would then work to develop a plan to cleanup the site. On average this takes 2 years. Finally, the EPA would clean up the site, or force responsible parties to cleanup the site. On average, the cleanup process takes 8-11 years.

Weiner and Velazquez wants the EPA to start testing the site to get the process moving.

newyorkshitty has video of press conference as well. Last year, Attorney General Andrew Cuomo said the state would sue Exxon over the spill. The spill has also inspired some protest art.