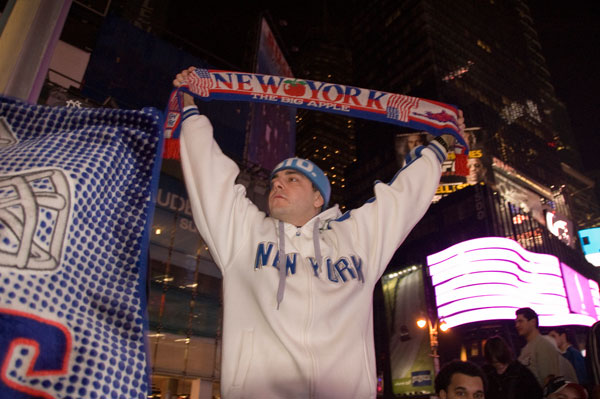 Photograph of a Giants fan in Times Square by Johnia! on Flickr

After the stunning Giants' Super Bowl win, people cheered like they hadn't seen a Super Bowl victory in 17 years! Throughout the city, folks were stumbling onto streets, chanting the names of players and even getting arrested.

A thousand people flooded Times Square, reportedly jumping on cars and sitting on top of phone kiosks, but the Post says no one was arrested. On the Upper East Side, 86th Street was closed by the police and in Brooklyn, fire trucks "roared down the boulevards with their lights on and horns blaring." Heck, people were even moved to dance naked on cars! 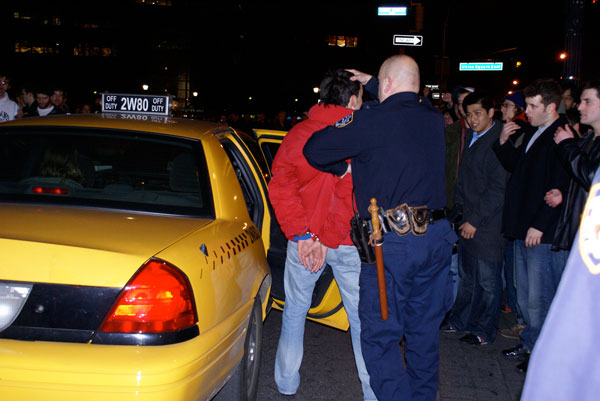 Photograph of a Union Square arrest by daniel.gene on Flickr

In Union Square, there were arrests. The Washington Square News reported that two NYU students were nabbed when a female freshman banged on the window of one of those undercover police cars that look like cabs.

Two officers jumped out of the car, threw the girl onto the vehicle's hood, arrested and handcuffed her and put her in the car's backseat.

As the car continued to drive through the mass of people, a male sophomore approached the vehicle in what onlookers said was an attempt to check on the girl. He was arrested as well.

"That's my boy," one onlooker said of the sophomore. "He didn't do anything, and they cuffed him."

As for the ticker tape parade, here are the details:

This will be first ticker tape parade for a winning Super Bowl team in NYC; during the past Giants' wins, then Mayors Ed Koch and David Dinkins declined to hold them (Koch said the Giants were "foreigners", Dinkins didn't want to have a parade just as the Gulf War was starting).

WCBS880 has good info, plus a map. And expect lots of drunk, stumbling people in the middle of the day. Try to be patient.