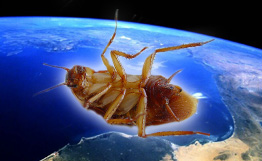 Think you've seen some big cockroaches around here? Apparently there are far superior critters in space! It's being reported that some cockroaches were conceived in space late last year onboard the Russian Foton-M bio satellite and are developing faster than the common terrestrial ones we see scurrying about the city. Some "highlights":

The experiment is ongoing and part of an Institute of Biomedical Problems study; the roaches (and other small animals) were sealed in containers and filmed during the flight. Wired describes this as "a giant leap forward into our understanding of how gravity impacts conception and development." And, of course, a leap forward in understanding how an army of mutant cockroaches will return to earth and enslave the human race. Gothamist, for one, looks forward to welcoming our new insect overlords!

#boing boing
#cockroaches
#experiment
#gothamist
#roaches
#run
#science
#space
#the city
#wired
Do you know the scoop? Comment below or Send us a Tip