Sunset Park Tenants Are Living Without Gas As Gentrification Closes In

"It exploded. I plugged it in and it went boom," said Francisca Ixtilico, a longtime tenant at 533 46th Street in Sunset Park, describing the hot plate issued by her landlord. For the past three weeks Ixtilico and her fellow rent-stabilized tenants have been without cooking gas. According to the city, it was cut off because of a gas leak—the latest in a long string of grievances at 533, and adjacent rent-stabilized townhouses 545 and 557 46th Street.

Outside Ixtilico's apartment, with its broken refrigerator and stove, apartment-wide renovations are underway. Last week, sheets of clear plastic were taped across the front door of each apartment, with a slit just narrow enough to pass through. On Wednesday, the sound of jackhammers rattled through the building. Maria Gil, a tenant for 34 years, said the workers were drilling the tile to expose brick. She's gleaned that the plastic sheets are meant to keep out dust, but she says no notice of repair work was posted by the landlord.

For the majority-Spanish speaking and immigrant residents, updates on building repairs come primarily from workers in the hallways.

All three 46th Street buildings are part of an Alternative Enforcement Program through NYC Housing Preservation and Development (HPD), which identifies and monitors the 200 "most distressed" apartment buildings in the city. Tenants launched a two-year rent strike in 2010 over a laundry list of complaints, from rodent and roach infestations and spotty heat and hot water to leaking ceilings and a 10-foot-tall pile of garbage in the basement.

The buildings went into foreclosure in 2011 (the Observer details how Sunset Park properties proved difficult to flip at the time, even as real estate heated up in nearby Park Slope and Cobble Hill) and by 2013 they'd wracked up 684 HPD violations across 51 apartments. Today, 656 of those violations remain open. 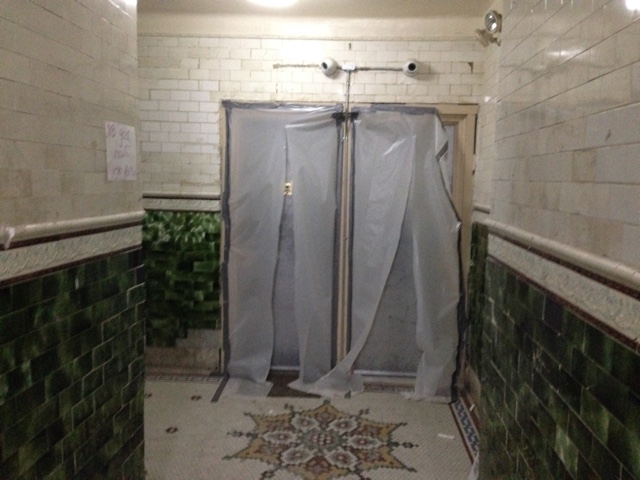 Sharp Management took over last May, ending the foreclosure process. But while repair work is finally underway—thanks to considerable pressure from HPD and South Brooklyn Legal Services—tenants say that repairs have been administered unevenly, without proper notice, and in some cases, shoddily (Moshe Mehlman, listed on HPD as the management office's chief officer, is on Public Advocate Letitia James' worst NYC landlord watchlist). While Ixtilico has resorted to taping her refrigerator's insulation into place, an upstairs apartment has fresh paint and brand-new appliances.

Tenants say that 533 doesn't have functional mailboxes, and that the buzzer system is broken. Heat and hot water are intermittent, though two apartments we toured on Thursday were very warm (the residents credited a recent boiler fix).

About 20 tenants are also battling eviction cases, according to the Urban Homesteading Assistance Board (UHAB), a nonprofit that has been working with the tenants since the foreclosure proceedings began. In some cases, Sharp is demanding rent that they allege went uncollected during the foreclosure process.

"In all of the foreclosure buildings I've ever worked with, it's always a complete disaster," said UHAB spokeswoman Kerri White. "For a new landlord to be like, 'You owe me all of this money from when you were living in a disaster area' is immoral and ridiculous."

White added that it is not uncommon for rent payment records to get jumbled in the foreclosure process. "I've never worked with a building that was in foreclosure where the records were intact," she said. "It just never goes smoothly. So it's not surprising to me that there's not full records, but it is surprising that their first tactic is to try to evict half of the building."

"It is very clear to me that the record keeping was a bit careless," said Stephen Myers, a Legal Aid attorney representing six of the tenants. He confirmed that some tenants withheld rent in protest during the foreclosure process. Others have been paying with money orders, which can be difficult to trace in housing court. 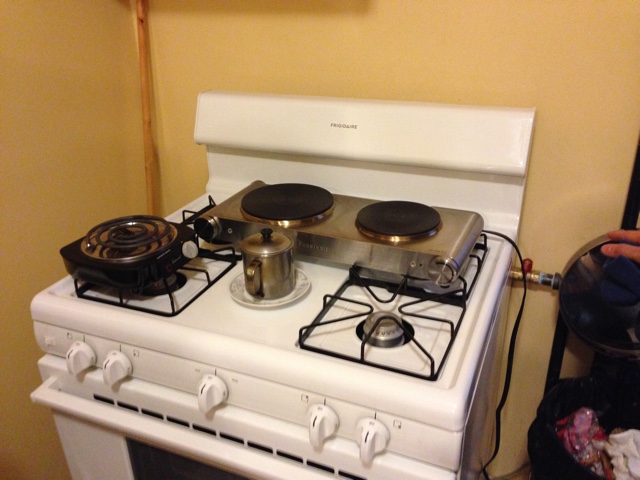 One of the freshly-renovated apartments, with a hot plate on the non-functioning stove (Emma Whitford/Gothamist)

None of the tenants we spoke with on Wednesday said they had been offered a buyout. "I'm stabilized," Gil said. "I'm not worried."

But while repairs from the foreclosure process lag, local politicians and activists fear that the tenants are facing a new threat—apartments that former owners couldn't wipe their hands of fast enough are becoming more attractive with the arrival of Smorgasburg and the gentrification of nearby Industry City.

According to local councilmember Carlso Manchaca, "There is no doubt that Sunset Park has been experiencing what a lot of other parts of the city have been more aggressively experiencing. As soon as someone vacates an apartment, an owner will take any opportunity to replace it with a market-rate paying person."

"The landlord sues you for non-payment of rent, evicts you for that, and then renovates the apartment," Myers said, describing situations he's seen play out in the past. "Or he won't evict you now, but he'll spend some money renovating the apartment and double or triple the rent." Under current law, landlords have the right to permanently increase the rent when rent-stabilized apartments undergo renovations.

"They think they can take advantage of us Latinos, us immigrants, us Mexicans, and that's not going to happen anymore," said Menchaca, translating for the tenants on the steps of 533 46th Street on Wednesday. "We're going to stand together in solidarity. Not just for these owners, but for all of the owners who want to come into our community, buy property, and kick us out. That is not going to happen."

A spokesperson for HPD confirmed that the agency had received reports of a gas leak, and that a plumber had been hired to address it. Repair work is expected to be complete in a few weeks. HPD, charged with closely monitoring Sharp, did not respond to a request for confirmation as to when they were notified of the leak.

Sharp Management did not immediately respond to a request for comment.

#gentrification
#rent increases
#sunset park
#original
Do you know the scoop? Comment below or Send us a Tip
A new Gothamist is coming! We’ve moved comments over to our beta site. Click here to join the conversation and get a preview of our new website.