Elected officials from South Brooklyn and representatives from the Legal Aid Society assailed anti-immigrant rhetoric Monday night at a community forum at IS 236, two weeks after reports of harassment at PS 169 in Sunset Park.

Speaking to a crowd that included school staff and local residents, Congresswoman Nydia Velazquez, Assemblyman Felix Ortiz, and Council Members Carlos Menchaca and Brad Lander addressed the recent bias incidents and described some of the resources available to immigrant communities.

According to a study from Southern Poverty Law Center, bias incidents and crimes have spiked since Donald Trump's election two weeks ago, immigrants being the group most targeted by this harassment. In New York, the NYPD has reported a 31.5 percent increase of these incidents from 2015 to 2016.

Last week, a crossing guard at PS 169 alleged that a school custodian made derogatory remarks about immigrants to her, saying they hoped Donald Trump builds a wall on the border and "I hope they throw them over the fence." The crossing guard also reported that on the morning after the election, a group of people drove past the school shouting "All you immigrants are moving out of here," as students were arriving for class. Sunset Park has a large immigrant community, primarily from Latin America and China. A majority of students at IS 139 are from these communities—many are first or second generation Americans.

Parents at the meeting expressed outrage about the incidents—some said they were nervous about sending their children to school. Some distraught students have also reportedly cried at home to their parents because of fears of deportation following the results of the election. 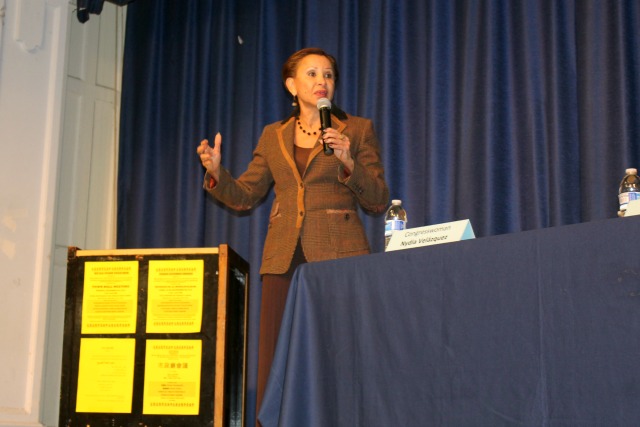 Rep. Velazquez sought to assure attendees about their safety. "We will see him in court," she said, in reference to Trump's plan to deport two to three million undocumented immigrants. She also said New York's "sanctuary city" policies, which prohibit the NYPD and other city agencies from coordinating with federal immigration authorities on deportation efforts, will provide a measure of insulation from federal policy. She did, however, suggest that undocumented individuals have a plan of action in place, such as building a relationship with an immigration lawyer. Velazquez has recently introduced legislation to establish a federal hate crimes hotline.

Council Member Menchaca said he feared the effect of bullying on the political climate in schools. "It took one comment to create a ripple effect in schools, a chilling effect on reporting bullying that's happening in our schools," he said.

If you have any questions or concerns regarding your rights as an immigrant, call 311 or contact the Mayor's Office of Immigration Affairs at (212) 788 7654. If you want to report an ICE raid within NYC, call the Immigrant Defense Project at 212-725-6422.

#carlos menchaca
#department of education
#hate crimes
#Nydia Velasquez
#sunset park
Do you know the scoop? Comment below or Send us a Tip
A new Gothamist is coming! We’ve moved comments over to our beta site. Click here to join the conversation and get a preview of our new website.