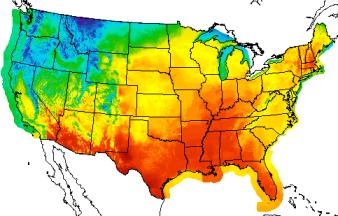 Another sunny spring day is in store for today. The high should be around 75 degrees. For you night people there's a tiny chance of a shower after midnight as an extremely week cold front crosses the region. All will be sunny by tomorrow and slighly drier air will allow the high to approach 80. Although Friday will be cooler, it is still expected to be another sunny day.

Cooler, wetter weather may arrive this weekend. A stronger cold front should drop the highs to the 65-70 degree range on Saturday and Sunday. The front's presence also means there will be a chance of showers and thunderstorms through the weekend. At the moment it looks like the best chance of rain is Saturday night.

The weather was away last week but we would be remiss if we didn't remark on the passing of a giant in the field of meteorology. Yesterday the Freakonomics blog posted a well-intentioned but naive report on the accuracy of television weather forecasts. In essence, forecast accuracy decreases the further you get from the time the forecast was made. Forecasters know this because of the work of Edward Lorenz, who died last week at 90. Lorenz was an atmospheric scientist at MIT who showed that weather forecasts are highly dependent on initial conditions. Forecasts are only as good as the observations feeding them and the observations are never good enough to allow for accurate deterministic forecasts beyond a week or so into the future. Lorenz's work also formed the basis of modern chaos theory and he coined the term butterfly effect.