Following a relatively un-hellish start to the Summer of Hell, the promised chaos and commuter suffering finally arrived on Saturday. Over the course of the day, two trains and a rescue locomotive were stalled at Penn Station, stranding nearly 800 people underground without air conditioning and triggering delays throughout the region.

The day's first snag came just before noon, when an Amtrak train from Miami became stuck while entering Penn Station, due to "an overhead power issue," according to Amtrak spokesperson Mike Tolbert. The company sent in a rescue locomotive, which also became stuck as a result of the electrical issues. A second rescue train—this one a "dual electric-diesel locomotive," according to Tolbert—eventually towed the train to safety, nearly 90 minutes after power first cut out.

As a result of the outage, service was briefly terminated between New York and New Jersey, and delays snarled much of the system for the rest of the afternoon.

Correction: Service is suspended between NY and NJ due to overhead power issues. We will provide updates as they become available.

Around 5:00 p.m., shortly after travel between New York and New Jersey resumed, a NJ Transit train lost power while arriving at Penn Station and became stalled near the same spot that the earlier train had gotten stuck. Passengers aboard that train said that they were trapped on hot cars without light or air conditioning for about 30 minutes.

"It was exiting the tunnel and pulling into Penn Station when the lights went out," rider Tanishia Best told Gothamist. "The A/C soon cut out and we were told to just remain patient because there was a power outage." 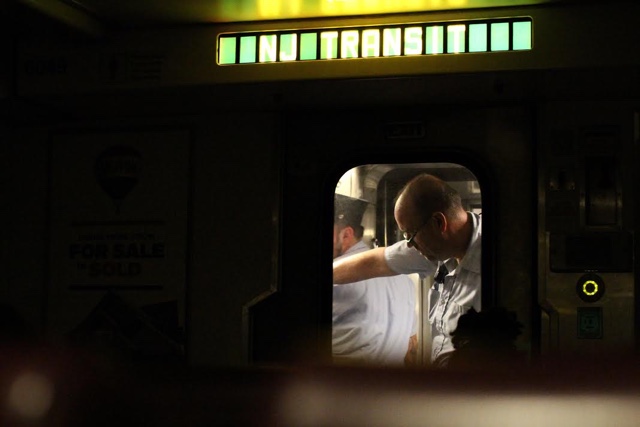 "People were frustrated," she added. "One guy was pacing up and down the aisle pretty upset. The air was stagnant."

That train, which carried approximately 700 people, had already been beset by delays from the earlier holdup, according to other passengers. "Our train had previously been delayed by more than 40 minutes at another transfer so we were already pretty frustrated," said commuter Dominic Umile. "And totally sober, which definitely worsened things."

As of Sunday morning, Amtrak was still unsure what caused the electrical outage.

"We're continuing to monitor the area and the root cause of what caused the power outage remains under investigation," Amtrak spokesperson Mike Tolbert told Gothamist. "But it is our hope that there are no further issues."