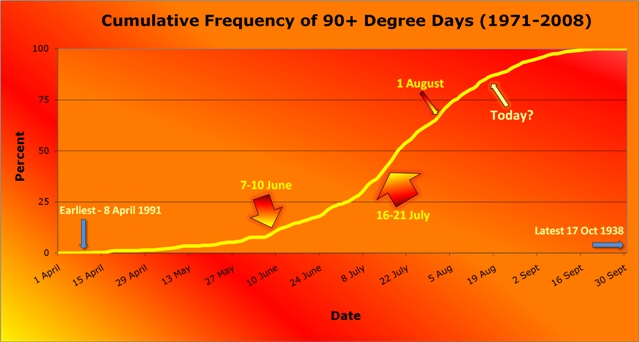 Sort of. After eleven days of at or below normal temperatures, a huge high pressure system that covers the entire country east of the Rockies and north of Florida, will bring sunny, warm weather back to New York today. The high on this increasingly humid day should be in the upper 80s if not 90 degrees. Hailing the possible return of the 90 degree mark we made a graph!

So far 2008 has had eleven days in which the mercury has climbed to at least 90. The 1971-2008 average is 17 days. In 2004 there was only one 90 degree day, while 1993 reached that mark 39 times. Ninety degrees has happened most often, 16 times, on July 18th. On average, half the city's 90 degree days occur before July 19th, and by today we've typically had 87 percent of the 90 degree days that we can expect in the summer. Climatically speaking, summer only has a couple more hot days to give this year.

An approaching cold front means tomorrow afternoon may feature a few showers (geez that new NY1 weather page is sad looking). Expect a high in the mid 80s. Tomorrow's rain, if any, will be the weather event of the week. Wednesday will be sunny and only in the upper 70s. Thursday through the weekend is currently looking slightly warmer and sunny. Elsewhere, it looks like Tropical Storm Fay will roll through the Florida Keys late tonight and possibly strengthen into a minimal hurricane as it scrapes the Florida Gulf Coast tomorrow.