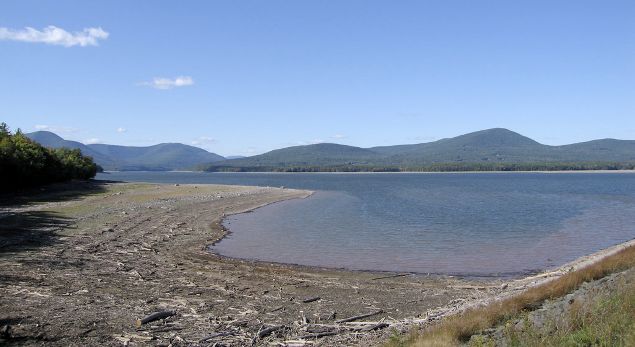 There may be a bit of fog again tonight. The fog won't stop tomorrow from heating up, however. The jet stream is switching from a mostly west-to-east flow pattern to a looping, trough out west, ridge over the east flow pattern (warning: nerdy weather map link). That ridge will allow warm air to encroach from the south. It currently looks like the high temperatures will hover around 80 each day from Thursday through Sunday. There may be a shower or two sometime Sunday or Monday when a cold front tries to break the warm spell.

While Gothamist was in the Catskills last weekend we decided to check out the Ashokan Reservoir, the second-largest reservoir in the city's water supply system. Several towns were either moved or destroyed in the building of the reservoir in the early 1900s. The Ashokan has a capacity of 122 billion gallons of water. As of yesterday it was at 70.6 percent of capacity. Although the floor of the reservoir is exposed near the shoreline in the photo above, the level of the water supply system is only slightly below normal for early October. If you're ever driving along Rt. 28a and want to see the reservoir look for the giant fountain. It originally served to aerate the water (does anyone know if it still does?), and is an impressive sight in its own right.

#As
#gothamist
#health
#joe schumacher
#Six Degrees
#the city
#weather
#While Gothamist
Do you know the scoop? Comment below or Send us a Tip