One highlight of the Super Bowl's pre-game was the appearance of the US Airways Flight 1549 crew: Pilot Captain Chesley Sullenberger, co-pilot Jeffrey Skiles, and flight attendants Doreen Walsh, Sheila Dail, and Donna Dent. The Flight 1549 was honored by the NFL and are getting ready for a media whirlwind; Newsday lists their upcoming appearances: 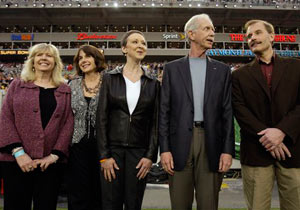 We wonder if Sully will stop by City Hall for his key to the City Hall—and whether he'll discuss Richard Branson's enthusiastic and generous offer to jump ship to VirginAir!

#chesley sullenberger
#flight 1549
#miracle on the hudson
#sully
#us airways flight 1549
Do you know the scoop? Comment below or Send us a Tip