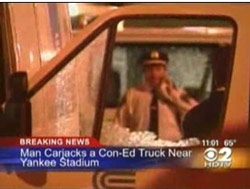 Last night a gunman on the run in the Bronx got stuck in Yankees' post-game gridlock after stealing a Con Ed van. Then he took his own life before police could apprehend him.

Yesterday's game went down to the wire, and it was 9:44 p.m. when Mariano Rivera threw the last pitch (the batter grounded into a game-ending throw to first base). As fans filtered out of Yankee Stadium to either hop on a train or endure the post-game traffic, a woman ran into a meat market on Cortlandt Ave. screaming that she'd been shot while cradling a bloody arm.

The man who allegedly shot her panicked, reportedly her boyfriend, and jumped into an idling Con Ed van at a construction site. The van's rightful driver ended his foot chase when he found himself face to face with the thief's pistol.

The gunman was chased by police but then got stuck in post-game gridlock at 161st St. Police approached the utility van cautiously on foot, but before they got there, the driver turned his gun on himself and committed suicide. The Con Ed van rolled back and hit another patrol car.

The woman is in stable condition.