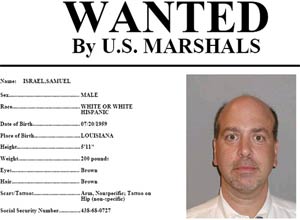 Samuel Israel, the hedge fund founder who went missing just as he was supposed to report to prison for 20 years, is reportedly in police custody after surrendering early this morning. The NY Times reports Israel had been in Southwick, Massachusetts where he "was talking to his mother on the phone when he walked into a local jail and surrendered to the United States Marshals task force."

Israel, who was convicted of swindling hundreds of millions from investors in his Bayou Hedge Fund Group, left his SUV on Bear Mountain Bridge on June 9, with the keys still on the ignition and the words "Suicide is painless" written on the dusty hood. His girlfriend gave investigators a suicide note and claimed not to know more, only to later confess she helped him escape.

Many of the people he had scammed were skeptical Israel actually killed himself, suspecting he had run off the Caribbean or another island. Southwick, MA is about 117 miles from where Israel disappeared.