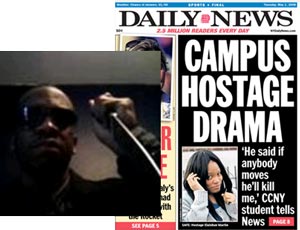 Yesterday afternoon, a Brooklyn man was apprehended after threatening a City College student and holding what looked like a gun--but turned out to be a pellet gun--against the head of another student. The police convinced him to drop the gun and Kirk Hanley, 22, who had also pointed the gun at his own head, was found with suicide notes and taken to St. Luke's Roosevelt for observation.

The incident took place at City College's Harlem Campus. According to the Daily News, Hanley, a student, was rejected for a date and got into an argument with the 20-year-old female student. Frightened, she went to the financial aid office where she works, with Hanley following her, and a counselor called campus security.

When security arrived, Hanley grabbed another student in the waiting room, Elaishun Martin, who said, "He said if anybody moves he'll kill me." Another student witnessed Hanley repeating, "'I've been waiting 21 years. All I needed was help,'" while Hanley also allegedly said to the police, "I want to die like Sean Bell."

After calming Hanley down, the police took him to the hospital and charged him with criminal possession of a weapon, reckless endangerment, and kidnapping. Hanley's MySpace page lists his interests as "Video games, politics, tragedies," books like "Silence of the Lambs, Red Dragon, Hannibal" and heroes like "Timothy McVeigh, Cho, Reb and V." And his about me blurb reads:

I'm a fatal error, the frankenstein of the 21st century, a godlike nonbeleiver, the product of a racist hypocritical world. I don't believe in racism because I pretty much hate everything that exist. To me life is nothing but a meaningless coincidence,every breath just brings us closer to death. I'm a lonely loner, but it was'nt a choice, this miserable existence has been forced upon me.Im incredibly sad and depressed because all my life i've received nothing but shit. Ive been laughed at for my my speech disorder, spit on (literally), humiliated, rejected, and isolated. I try to a good person but people constantly try there best to hurt me.I try my best to treat people with respect because thats how i wish to be treated.

City College does have an emergency message system, but it's unclear if one was sent out yesterday.

#city college
#harlem
#rejection
#suicide
Do you know the scoop? Comment below or Send us a Tip