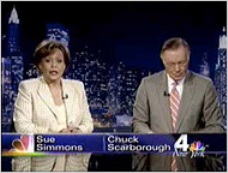 WNBC anchor Sue Simmons's unexpected cursing during a Monday night promo continues to be watercooler gossip. The veteran news anchor appeared on yesterday's broadcasts, surprising some industry insiders who thought she might be suspended.

As for the reason why Simmons may have cursed on-air, various WNBC sources suggest the she and Chuck Scarborough thought the promo was being taped. So when Scarborough was looking at his computer monitor, not paying attention to reading the tease, Simmons let it rip. Here's how the NY Times explains what happened, without getting to use the word in question--not even calling it the "f-bomb" or "f---":

When they were cued, Ms. Simmons read her line: “At 11, paying more at the grocer, but getting less. We’ll tell you how to get the most.”

The station then cut to images for an upcoming story about a cruise ship, without any narrative from the two anchors.

At that point, Ms. Simmons says, basically, What are you doing?

But her question had two extra words.

The NY Post put Simmons on the front page, notes how she has a potty mouth and speaks to a former colleague who claims Simmons "likes the sauce." An employee at Gallagher's says, "I wouldn't say she gets sloshed - sloshed, that wouldn't be the right word. I would say she gets happy. She gets very happy."

Newsday's Verne Gay wonders what this means for Simmons's future, given that she's cultivated "a veritable portrait of amiability - mischievous, occasionally puckish, though early in her run, prone to on-air gaffes."

The Post has a quote from someone familiar with Simmons's plight: Arthur Chi'en, CW 11 reporter who was fired from WCBS 2 for swearing at two shock jock fans. He said, "I feel for her, as someone who has gone down that path."

#chuck scarborough
#f bomb
#sue simmons
#swearing
#wnbc
Do you know the scoop? Comment below or Send us a Tip