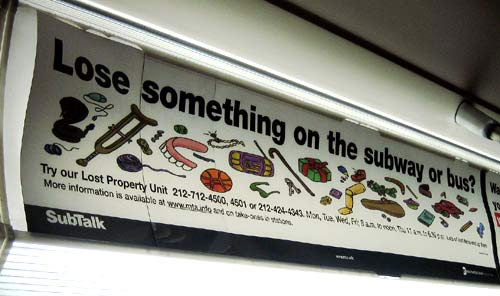 A state office responsible for oversight of the MTA recently conducted a test of the NYC subway system's lost and found department and the results were not encouraging. Investigators turned over 26 items to the New York City Transit employees--both bus and subway workers, including keys, a purse, a Walkman, a watch, a jacket, and an electric shaver. Only three of the items eventually made their way to the Lost & Found office, which is located behind a metal door at the subway station across from Madison Square Garden on 34th St. and 8th Ave.

Inspector general Richard Kluger told The New York Times that the test was not meant as a sting operation, but rather an audit of a lost and found system that returns fewer than one in five recovered items to its original owner. He also emphasized that it's unclear whether the missing 23 items that were never processed were kept by transit employees, discarded, or simply misplaced. The audit did not include the Metro-North system, which operates its own Lost & Found room in Grand Central Terminal.

We find this an encouraging testament to New Yorkers' good spiritedness: the Times reports that contrary to what one would expect, wallets and purses containing cash are regularly turned in to NYC Transit's Lost Property Unit. Between April 2005 and March 2006, $59,050 in cash was turned over to the MTA. How much of that made its way back to the people that lost the money is unknown.

We wrote about the subway's interesting ads regarding forgotten items in 2005 that remind one to check one's belongings before leaving a train so one doesn't forget things like your dentures or prosthetic limbs. Of course, if you think you've found someone's lost property, be sure to turn it in right away. It could be a Lucky Bag and you will be busted for attempted theft.