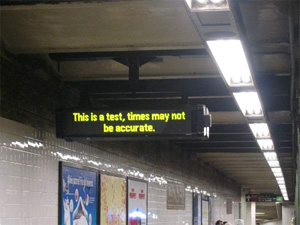 Ah, the Second Avenue subway project—that mythical, subterranean Chimera that mayors and governors have spun tales about since time immemorial—is once again in danger of abandonment. With all the talk of service cutbacks as the MTA stares down the barrel of a $1 billion budged deficit, some are wondering if the transit authority should really be spending an estimated $3,000 every minute of every day to dig under Second Avenue at this particular juncture.

Even Gene Russianoff of the Straphangers Campaign has begun to doubt the efficacy of this and other costly projects, such as the 7 train extension. He tells the Times, “The M.T.A. just proposed cutting a fifth of their core capital program. That included dropping fixing 19 stations, and hundreds of millions for emergency fans in the tunnels. At some point, maybe not yet, how vigorously can we proceed on these expansion projects if we don’t have the money to keep fixing the existing system?”

For instance, what about those wondrous electronic signs on station platforms, common in other cities, that the MTA promises will display the wait time for the next train, as well as other announcements? According to the Daily News, the cost of installing these futuristic marvels in 152 stations has swelled to $185 million, and now the MTA says not to expect them until 2011, five years behind the original schedule. Please be patient!

Instead of digging new tunnels, some advocates argue that the MTA should shift that spending to the cheaper bus rapid transit, particularly the new Select Bus pilot program that's successfully cut travel time between Manhattan and the Bronx using dedicated bus lanes and pre-paid fares. The cost of preparing the streets for rapid transit is $1 million to $2 million per mile, compared with $1 billion per mile for the Second Avenue subway. Joan Byron at the Pratt Center for Community Development tells the Times, "If you just took the cost overruns for one year on any of the megarail projects, that would pay for a handsome bus rapid transit network."

Not that buses are cheap either, what with the MTA paying through the nose for the ultra-low sulfur kerosene fuel they switched to back in 2000. When they renewed their contract with the supplier in 2003, some officials futilely warned that this particular kind of fuel could soon be hard to come by and pushed a cheaper alternative. Now, five years later, nobody else has made a bid to supply the MTA, so they're getting squeezed by a lone supplier to the tune of $26 million–three times what it paid last year. The Times a big expose on the debacle, which Howard H. Roberts Jr., president of New York City Transit, admits is the result of poor choices.