A group of transit workers are calling on the MTA to postpone its planned L train construction work—which is scheduled to start on April 26th—until an independent third party has reviewed Governor Andrew Cuomo’s plan and deemed it safe for workers and riders.

A handful of train operators were posted at the Bedford Avenue station in Williamsburg on Wednesday morning, handing out flyers to passengers to call attention to health concerns.

“Learn about the air you’re breathing here!” called out William Moya, a train operator on the A line, from behind a blue face mask.

The flyer, which bears a red skull-and-bones “poison” symbol at the top, outlines three major concerns: the dangers of carcinogenic silica dust, the condition of the tunnel’s bench walls, and dangerous overcrowding as a result of long wait times between L trains during construction on nights and weekends. 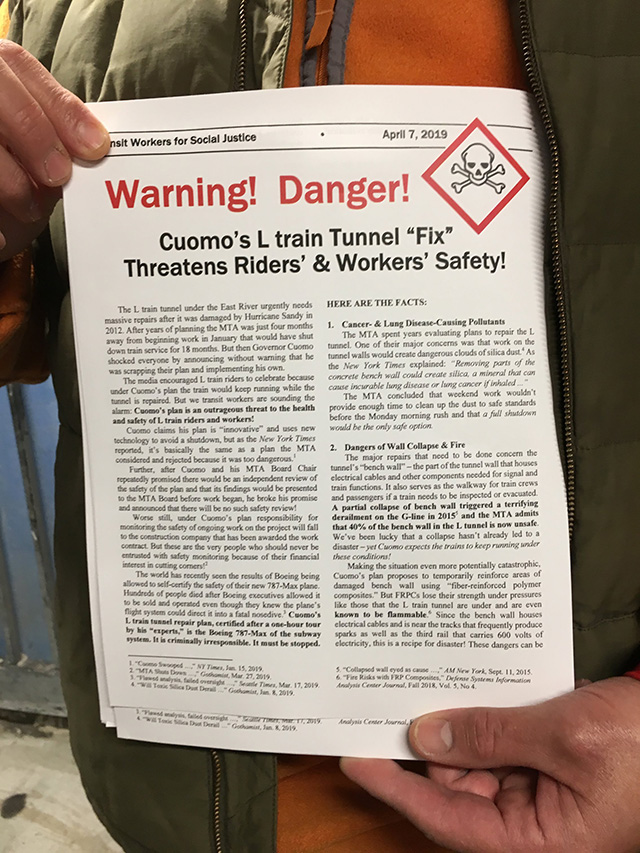 Silica dust, which can damage the lungs and even elevate the risk of lung cancer if it’s inhaled at high concentrations, is commonly created when construction crews do work that involves drilling or breaking tunnel walls.

“I don't think this plan is fundamentally safe,” said Seth Rosenberg, a train operator on the G line and a member of Local 100 Fightback, which organized a larger coalition called Transit Workers for Social Justice for this flyering campaign. “The first step is to get it independently vetted by a trusted source and not just go on Cuomo's whims.”

The MTA, several MTA board members, and New York City Transit President Andy Byford have all indicated that a third party consultant would be called in to review the scope of the revised L train tunnel plan. But just two weeks ago at the last board meeting, acting MTA Chair Freddy Ferrer said the agency has hired a consultant to monitor safety and environmental considerations during the shutdown, not before.

Some riders were a little shocked to learn this. Johanna Munroe, who works in healthcare research and lives near the Bedford Avenue L station, was studying the flyer on the platform as she waited to catch an L into Manhattan.

“I’m surprised there’s no review,” said Munroe. “I didn’t even consider my safety, even though I work in a hospital!”

Michael Bolognino, who also takes the L every day, said he’s been alarmed at the sight of construction workers with face masks in the Bedford station.

“The rest of us are not wearing masks,” said Bolognino. “I’m worried about it, and I don’t totally trust anything that I see or read, so I need to do my own research.”

Another passenger, Krystyna Printup, said she was hospitalized for an asthma attack two weeks ago.

“And I take this train everyday, twice a day,” said Printup. “There’s definitely times where I’m like, ‘Oh my God, I should be wearing a mask.’” 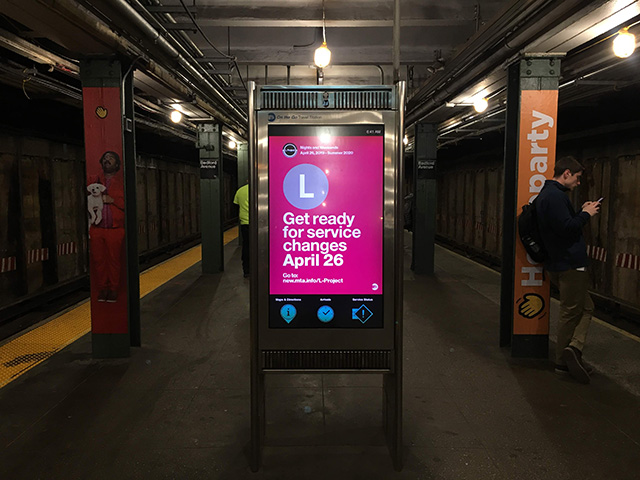 Just three weeks ago, when riders were complaining of construction dust at the Bedford Avenue station, the MTA assured the public that a contractor analyzed the air quality and deemed it safe.

When asked about today’s flyering campaign, MTA spokesperson Max Young called the transit workers a “fringe group seeking to advance their own political agenda within the union.”

As for the claims they’re making on their flyer, Young went on to say: “Using tried-and-true methods adopted in complex projects around the world, we have reduced the amount of demolition—and the resulting dust—by more than 90 percent and will aggressively monitor the air on a continual basis... Safety is the MTA’s top priority for the L project, as it is with any project or decision we make, and these claims are not only outrageous and false, they are irresponsible to the public.”

In a statement, Transport Workers Union Local 100 President Tony Utano said, "Safety is very important to us and we’d never let workers be in an unsafe environment. We’re monitoring the situation and do not believe it’s unsafe to use the L line or work in the stations."

Governor Cuomo’s office did not immediately respond to a request for comment.

For Rosenberg, the current controversy brought back memories of 2013 construction work on the Montague Tube, which carries the R train under the East River. The MTA decided to close that tunnel completely to perform Sandy-related repair work. The project was largely celebrated for finishing ahead of schedule and under budget, but Rosenberg says it got off to a rocky start, with workers flagging health risks related to dust. At that time, he said, officers listened and responded.

"The MTA is a big organization and I think they were trying to learn their lessons from 2013,” said Rosenberg. “And Cuomo came in there and blew all of that out of the water."

At one point during the one-hour flyering campaign, two NYPD officers told the transit workers that they needed to exit the station if they wanted to pass out flyers, saying they were disrupting the flow of traffic. The workers complied, and finished handing out flyers at the top of the stairs.

Transit Workers for Social Justice plan to hold another flyering event at the Union Square L station on Thursday evening.

#l train
#MTA
#subway
#we the commuters
#williamsburg
#original
Do you know the scoop? Comment below or Send us a Tip