Subway vs. Uber vs. Bike: Who's Faster In A Post-L Train NYC?

It's the afternoon rush hour in Union Square and you need to meet friends at Oasis in Williamsburg. In simpler times you'd take the L, but this is the summer of 2019, the summer of the L-Pocalypse. Do you hop on a bike? Hail an Uber? Or take your chances with the train? Yesterday Transportation Alternatives pit these commutes against each other in a race to simulate the impending Canarsie Line shutdown, and the results are familiar to anyone who regularly experiences the joy of riding a bike in New York City: cycling rules.

Lisa Silvera, a regular cyclist who was riding an Elby electronic pedal-assist bike, made it from Union Square to Oasis in just under 20 minutes, via the Williamsburg Bridge.

Still, Silvera experienced the perils of cycling in Manhattan at 5:00 p.m.

"It was a challenge," she said. "People drive in the bike lane." Silvera also described the scene from Delancey Street to the bridge as a "mosh pit" of bikers all rushing to get on the bridge at the same time (one can imagine the scene in 2019).

Second place went to Paul Steely White, the executive director of Trans Alt. He caught an Uber and arrived in 51 minutes (the app estimated a 40-minute travel time).

"It's unfair to Uber," he admitted. "Would anyone in their right mind take an Uber at rush hour?"

It's also safe to assume that vehicular traffic on the Williamsburg Bridge might be considerably worse if the L train isn't running. The MTA has also said that shuttle buses are an option. 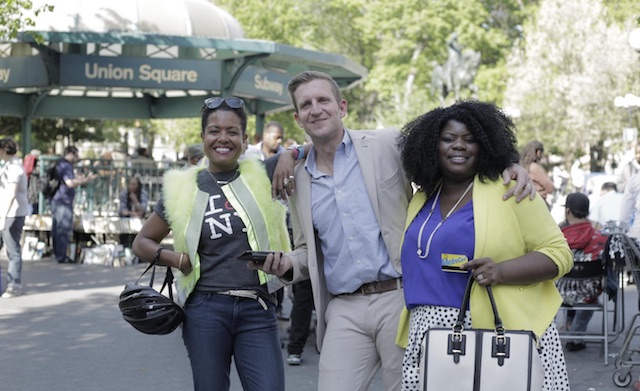 In dead last came the subway rider, Danna Dennis of the Riders Alliance.

She took the 5 train one stop from 14th Street to Brooklyn Bridge, and narrowly missed the Z train to Brooklyn. She waited six minutes for the next J train to Marcy Avenue, then she walked to Havermeyer and Broadway to get the B62 bus. Dennis said it never came, so she took the B59 to Bedford and 1st, and walked the remaining six blocks.

"This is what people will have to do," Dennis said of the looming shutdown.

As for us, we hopped on the L train and made it to Oasis in 13 minutes.

"There is really no good substitute for the L train," White says. "But a combination of better bike facilities and exclusive-lane bus service would go a long way."